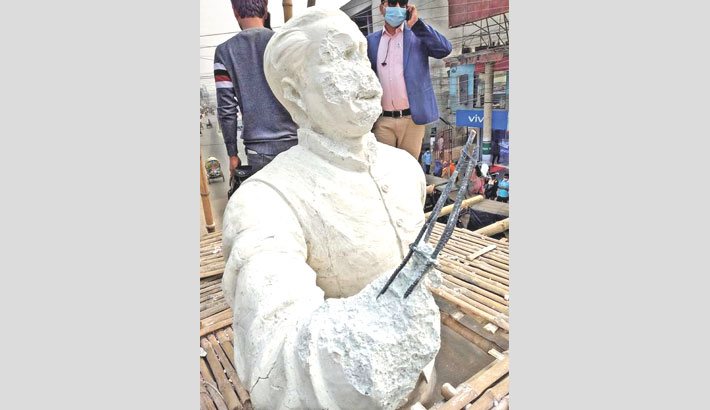 Unidentified miscreants damaged face, right hand and parts of left hand of the statue which was under construction at the Panchrasta intersection in the district town.

SM Tanvir Arafat, superintendent of the district police, said workers found the sculpture vandalised in the morning and informed police of the incident.

“Miscreants distorted the face of the sculpture with a hammer and broke its wrist,” he added.

Kushtia Municipality Executive Engineer Rabiul Islam said it was decided to set up three sculptures of Bangabandhu at the intersection with the municipal funds.

The sculptures facing main roads were being built. At the bottom, there will be the murals of the four national leaders.

Mahbub Jamal Shamim, a sculptor from Jessore, got the work order through tender. It will cost about Tk 30 lakh. The construction work started on November 17.

The construction work of a sculpture of Bangabandhu giving the March 7 speech was almost completed.

The incident took place in Kushtia amid protests by various Islamist organisations over the construction of Bangabandhu’s sculpture in Dholairpar area in the capital.

The vandalism of Bangabandhu’s sculpture in Kushtia sparked widespread criticism.

Different political and social organisations, including Awami League and Jatiya Samajtantrik Dal, staged demonstrations, processions and human chains in protest against the incident.

Mahbubul Alam Hanif, an MP from Kushtia-3 constituency and joint general secretary of Awami League, “Such a dirty work will not be tolerated in any way. All those who are involved in the vandalism of the sculpture will be punished. Police have already been instructed to take action.”

Kushtia SP SM Tanvir Arafat said, “We’ve collected the CCTV footage of the spot. The footage shows two persons vandalising the sculpture around 2:00am. We are trying to arrest them.”

After this incident, surveillance has been increased on all the sculptures.

Kushtia Deputy Commissioner Aslam Hossain said all the sculptures in the district have been put under CCTV cameras. The UNOs concerned have been instructed to increase surveillance as well.

Kushtia Municipal Mayor Anwar Ali said those who are against Awami League and cannot accept Bangabandhu caused the incident.

The police administration has been informed of the incident. A case is underway.