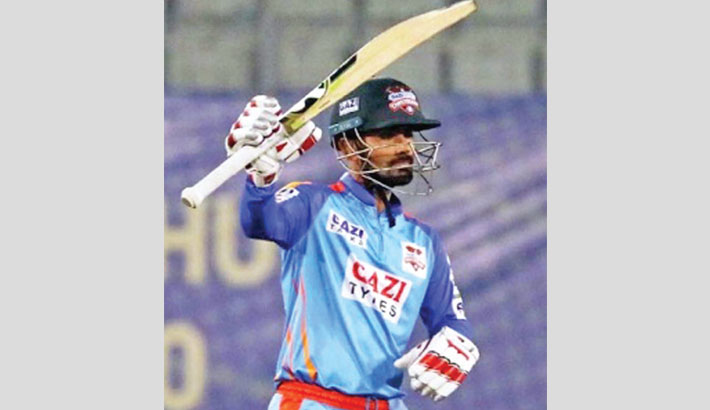 Bangladesh opener Liton Das feels that the decision to change his mind-set has provided dividend for him in the ongoing Bangabandhu T20 Cup.

Liton, who is going through a purple patch in the ongoing tournament for Gazi Group Chattogram, scoring 200 runs in four innings, seems to be batting in a different zone all-together.

While some of his national teammates are yet to flourish, the right-handed batsman already scored two fifties which include the highest score of the tournament so far, making 78 runs against Minister Rajshahi which eventually helped them win a game in the last ball.

Liton’s Gazi Group Chattogram remained unbeaten so far in the tournament putting together a promising team focusing on the having a depth in their batting department.

The names in the batting order look exciting for the fans as few of the batsmen from the national team’s playing eleven have been roped in by the port city outfit.

As expected, Liton Das and Soumya Sarkar opened the innings and all eyes were on them as the two are regular names at the top-order of Bangladesh team.

They helped Chattogram earn nine-wicket wins in the opening two games and Liton looked to be in supreme touch in every innings which he played so far though he failed to convert his starts to big scores despite starting well in two innings.

“We know and understand our game and that helps us form the partnerships,” said Liton

“Sometime he (Soumya) is relieving my pressure by playing shots at the top and that makes it easy for me at the other end,” he said adding that he is rushing to play his shots.

“Actually, I have changed my game and I believe this is totally mental setup. Since I was hitting the ball well due to the dew, I tried to play shots with balance,” he said.

“If you go through the entire tournament, runs are not flowing in the power-play and wickets are falling as well. I personally feel batsmen are trying too. I played my basic game and played after watching the delivery. I wasn’t unduly aggressive and I feel these things have worked for me,” he said.

Liton added that winning the last game in the last ball only helped them gain confidence as winning tight matches increase self-assurance.

“Definitely, see we have won three games with ease where there was no added pressure. In the last match, we were on the verge of a defeat but I feel in T20, this type of win is needed too. However, we have seen that we can win by bowling well too and today Soumya did well. If he wouldn’t give that start, I wouldn’t have been able to play my natural game and Mosaddek did well in the end as well,” he said.

“So far, I have played three games and what I felt is that there is a lot of engagement in this type of game. If we manage another win, we will go near our target and I believe everyone felt that as well,” he concluded.