We are very happy 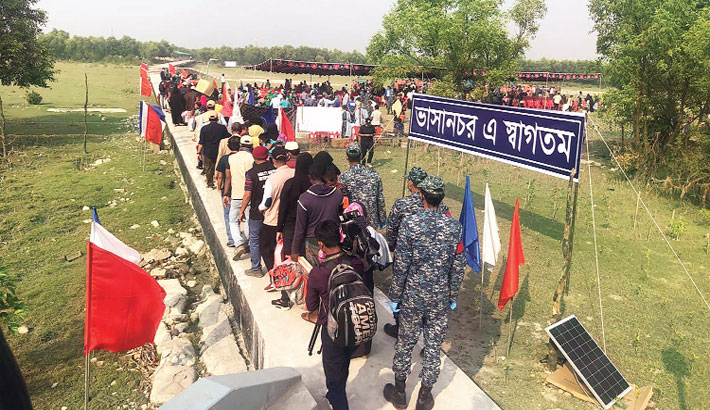 Rohingya people stand in a queue after they disembarked from a Navy ship to Bhasan Char in Noakhali on Friday. – AFP PHOTO

The first batch of Rohingyas was shifted to Bhasan Char on Friday as part of the government’s move to relocate the Myanmar’s persecuted nationals to the island gradually.

Six ships carrying 1,642 Rohingyas, who expressed their willingness voluntarily about the relocation, reached the island in Noakhali's Hatiya upazila from Chattogram around 3pm under the supervision of Bangladesh Navy and Bangla-desh Coast Guard.

Officials said the relocation began in the face of growing concerns over the extreme congestion in camps of Cox's Bazar and to avert any risk of death due to landslides and other unwarranted incidents. The government has decided to relocate 100,000 Rohingyas to Bhasan Char in phases.

Witnesses said the island of Bhasan Char took a different look as Rohingyas seemed to fail to hold their feelings of happiness seeing all the modern amenities there. They were seen calling their relatives and neighbours over their cellphones at camps in Cox’s Bazar and encouraging them to join them at Bhasan Char in the next batch.

Talking to this correspondent, several Rohingya men and women said they had some fear in mind about going to a new place but they had the trust on the Bangladesh government and people as they were given shelter when they were fleeing en mass the violence, persecution and atrocities in the hand of Myanmar security forces.

"We’re very happy to arrive in Bhasan Char as the accommodation is excellent here. We now have electricity, pure drinking water, hospitals, mosques, cyclone shelter, playgrounds and everything. We thank Allah as we got more than what we thought of,” said one Syed at his 30’s while describing his life in Rakhine, Cox’s Bazar and then in Bhasan Char.

He also categorically said no one forced them to go to Bhasan Char. “We all came here voluntarily,” he said, adding that everybody will be willing to come here once they see the facilities.

The Rohingyas were brought to Chattogram from Cox’s Bazar by buses on Thursday where they stayed overnight. They started for Bhasan Char around 10:30am on Friday after having their breakfast.

Bangladesh is currently hosting over 1.1 million Rohingyas, who fled Myanmar and took shelter in Cox’s Bazar in the face of ethnic cleansing and genocide by Myanmar security forces from August 25, 2017.

Project Director Commodore AA Mamun Chowdhury said the first batch of Rohingyas reached the island on Friday and more are expected to come in phases.

“We’ve been working for two and half years to shift Rohingyas to Bhasan Char under the directives of Prime Minister Sheikh Hasina,” he said, adding that cluster rooms were built in an eco-friendly manner.

Talking over daily needs, the authorities concerned ensured that food and non-food items will be provided to them in the next five to seven days. During the long period, the island witnessed three disasters, including cyclones Bulbul and Amphan, but there was no damage to it.

In this regard, the project director said, over 14,000 workers were involved in building shelter houses for Rohingyas, but they did not face any problem despite disasters. “So, Rohingyas won’t face any problem.”

The UN and various rights groups alleged that they have limited information about what has been going on and that the government has yet to allow a technical team to assess the feasibility of the housing project in Bhasan Char.

Security will be ensured by coast guard and navy while a hospital and a community clinic have already been built there to provide healthcare services to Rohingyas. Alongside, a kitchen market has already been established in the island.

The government has a target to shift over 1 lakh Rohingyas to Bhasan Char in phases in order to decongest the cramped Rohingya camps in Cox’s Bazar.

Talking to the Daily Sun, Mohammad Foyez, 28, a Rohingya youth, said he along with four of his family members came to Bhasan Char with a hope for a better living than that in Kutupalong camp in Cox’s Bazar.

“I’m very happy to get a new house in the island. Hopefully, the government will fulfill its commitment over ensuring facilities,” he said.

Another Rohingya national, Mohammad Selim, 60, told the Daily Sun that he came to Bangladesh in 2007 with a dream to get a better livelihood. “I’ve seen violence and serious scarcity of jobs in Myanmar, which forced me to flee to Bangladesh after coming to know about the communal harmony and job facilities here,” he said.

“Although I’ve long been here, I want to go back to Myanmar at last and I hope that Myanmar will take us back with due dignity and security,” he said.