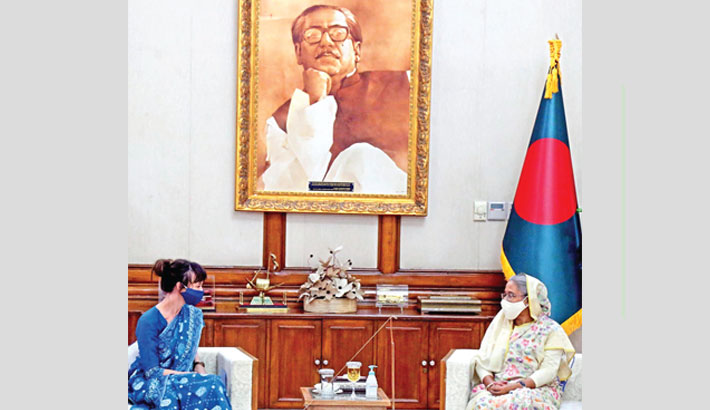 Prime Minister Sheikh Hasina on Thursday urged Swedish and Spanish investors to invest in Bangladesh’s special economic zones (SEZs) to avail of the opportunities are on offer there.

She made the call when the newly appointed Swedish and Spanish ambassadors in Dhaka met her separately at her official residence Ganobhaban, according to a press release of the Prime Minister’s Office, reports UNB.

The Prime Minister termed Bangladesh-Sweden relations historic, saying Sweden has been providing assistance to Bangladesh since 1971.

She mentioned her government’s different initiatives, especially social safety net programmes that led to the country’s poverty alleviation significantly, and empowerment of women during the last 12 years of her successive tenures.

Hasina said her government has effectively been dealing with the climate change impacts.

Referring to the Covid-19 pandemic, she said the pace of Bangladesh economic growth has slowed down due to this crisis and that her government has been trying to overcome the situation.

The Prime Minister appreciated Sweden for not cancelling any purchase order relating to Readymade Garments (RMG) of Bangladesh during the Covid-19 pandemic.

With the rise in Coronavirus globally, the RMG production came down in Bangladesh due to cancellation of purchase orders from different countries,

she said thanking Sweden, especially Swedish multinational clothing-retail company H&M, for not cancelling any order during the bad time.

In this regard, the Prime Minister referred to the telephone conversation with her Swedish counterpart Stefan Lofven and extended thanks to him.

Hasina said Bangladesh has already taken all the necessary steps to collect Covid vaccines for its people.

Swedish Ambassador Alexandra Berg Von Linde stated that Sweden has developed many green and environment-friendly technologies and requested Bangladesh to use those properly. She also said Sweden wants to work more closely with Bangladesh on gender violence and human rights issues.

The Prime Minister welcomed the new Ambassador and assured her of extending all sorts of cooperation during her tenure in Bangladesh. PM’s Principal Secretary Dr Ahmad Kaikaus and Military Secretary Major General Naqib Ahmed Chowdhury were present.

In a separate meeting, Prime Minister Sheikh Hasina invited Spanish investors to invest in Bangladesh’s Special Economic Zones (SEZs) and High-Tech Parks, as what she said many newer opportunities have been created to do business there.

“We’re setting up 100 special economic zones. We’ve created a business-friendly environment and opportunities there. So, Spain can invest here,” she told Spanish Ambassador Francisco de Asis Benitez Salas. Apart from RMG, jute, leather and pharmaceutical sectors have appeared as strong sectors in recent times in Bangladesh, and Spain can think of investing in these sectors, the PM said. By investing in the SEZs and High-Tech Parks, Spanish investors can avail of the tax benefits and attractive foreign direct investment-friendly packages offered by Bangladesh, she said.

They can also take advantage of the large domestic and regional markets, Hasina pointed out. Mentioning Bangladesh’s Delta Plan 2100, she said Spain could consider investing in water ways.

Referring to the Covid-19 pandemic, the PM said the pace of Bangladesh economic growth has come down to 5.4 percent from 8.15 percent due to this crisis, but her government has been trying to overcome the situation. Amon many countries, Bangladesh’s economic condition remains good amid the Covid crisis, she said.

Noting that Bangladesh has been waiting for Covid Vaccines, the PM said her government was taking steps to distribute the vaccines amongst the people.

The Spanish Ambassador highly lauded the role of the Sheikh Hasina government in tackling the Covid situation in Bangladesh.

He told the PM that Spain is the fourth largest RMG export destination of Bangladesh. The Prime Minister welcomed the new Ambassador and assured him of extending all cooperation during his tenure here. Ambassador Francisco thanked the PM for giving a video speech to a high-level event titled “Call for action to reinforce multilateralism” organised by the government of Spain on November 10.