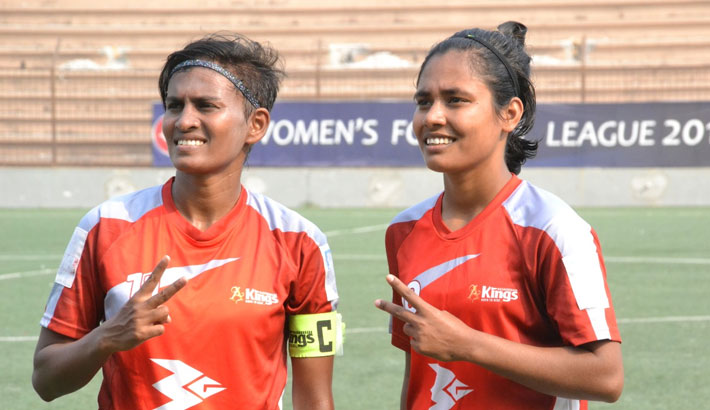 The star-studded Bashundhara Kings are on the verge of their maiden title of Women’s Football League (WFL) as they secured their tenth consecutive win beating lowly Kumilla United by 15-0 goals at Bir Sherestha Shaheed Sepoy Mostafa Kamal Stadium on Tuesday.

Kings earlier beat Kumilla United by 6-0 goals in their first-leg match of the league on March 9 at the same venue. With the day’s feat, the big-budgeted club Bashundhara Kings consolidated the top slot securing 30 points with 10 wins while their nearest competitor Nasrin SA earned 21 points in 9 matches.  Among others, Jamalpur Kacharipara XI are at third spot with 16 points, FC Uttar Bongo fourth are at fourth with 13 points, Begum Anwara SC are at fifth with 9 points. Kumilla United and Spartan MK Gallactico Sylhet are sixth and seventh securing one point each.

According to the Bangladesh Football Federation (BFF) bylaws, top two teams or bottom-placed teams have to play to a play-off to decide their place if their points tie. So, the league leaders have to earn one more point from the last two matches to confirm the title. Kings will play their last two matches against Jamalpur Kacharipara XI on December 5 at 03:00pm and FC Uttar Bongo on December 8 at 12:00pm, both at the same venue.

In the day’s other match, Uttar Bongo beat Gallactico Sylhet by 3-1 goals. Midfielder Mosamat Sultana, defender Joynob Bibi Rita and midfielder Nusrat Jahan Bristhti scored one goal each for the winning side in the 11th, 13th and 33rd minutes respectively while forward Salma Akter netted the consolation goal for Gallactico Sylhet in the 46th minute (45+1 minute). In the next match, Kacharipara XI will play against Begum Anwara at 03:00pm today.