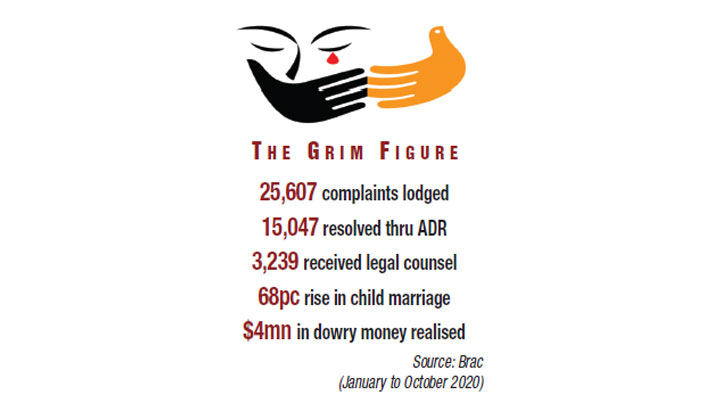 Gender-based violence has increased sharply across the country amid the coronavirus epidemic, said a new data released by Brac on Tuesday.

A press release issued by the organisation has confirmed that the Brac Legal Aid Services received a total of 25,607 complaints of gender-based violence through its 410 Human Rights and Legal Aid Clinics across the country in the first ten months of 2020.

“Of these complaints, 15,047 were resolved through alternative dispute resolution (ADR); legal counsel was provided to 3,239 survivors, and 1,724 complaints led to filing of civil and criminal cases. In addition, almost $4 million in dowry money was realised for survivors,” it said.

This finding is supported by the data provided by Polli Shomaj, Brac’s community-based women’s groups, which reported a 24 percent rise in incidents of violence against women in 2020 compared to 2019. Polli Shomaj works in 54 districts of Bangladesh to stop violence and help women understand their rights.

It said the number of child marriages reported in the first 10 months of 2020 grew by 68 percent compared to the same period in 2019.

There was also a 72 percent rise in the number of child marriages prevented by the women’s groups during the same period, the statement added.

In the third quarter of 2020 amid Covid-19 outbreak, the number of child marriages prevented was 219 percent higher than that in the same period in 2019.  Globally, girls who marry before 15 are almost 50 percent more likely to become the victims of physical or sexual violence from their husbands.

Asif Saleh, executive director, Brac Bangladesh, said, “Combating gender-based violence and ensuring gender equality is a top priority for Brac, and the Covid-19 pandemic is only making the fight harder.”

“During Covid-19, it is more important that a more concerted commitment and effort are made from all tiers of the government and society to ensure gender-based violence is stopped and rights of women are protected,” he added, according to the release.