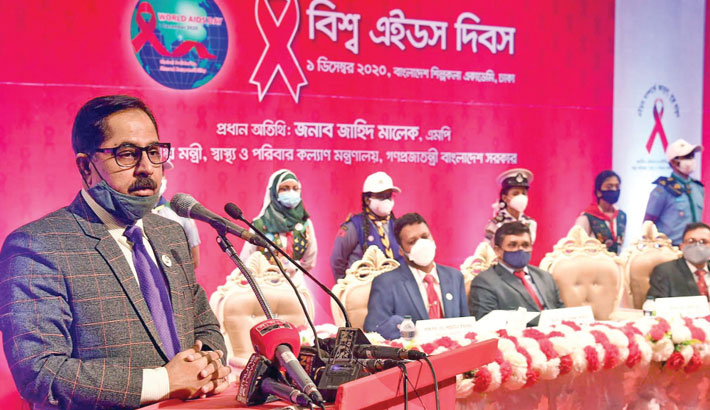 Health and Family Welfare Minister Zahid Maleque claimed that the number of AIDS patients has been falling in Bangladesh while it is rising in many countries across the globe.

“The government has been continuing treatment and diagnosis of AIDS free of cost. As a result, the AIDS infection rate is under control in our country,” he said in a statement marking the World AIDS Day-2020 on Tuesday.

To mark the World AIDS Day, the health ministry arranged a discussion at Bangladesh Shilpakala Academy in the capital. Zahid Maleque was present at the programme as the chief guest.

In a presentation on AIDS situation in Bangladesh, Prof. Dr Md. Shamiul Islam, Line Director (TB-L & ASP) of Directorate General of Health Services (DGHS), said 658 new AIDS cases have been detected while 141 HIV patients have died in Bangladesh in 2020.

Among the new cases, 124 were Rohingyas, he said.

The DGHS official said 14 lakh samples were tested in 2020 to detect the HIV virus while the number was more than 33 lakh last year.

According to the AIDS programme of the DGHS, Bangladesh has so far detected 8,031 AIDS patients and of them 1,383 have died.

According to different statistics of national and international organizations, currently around 13,000 HIV patients are living all over the country.