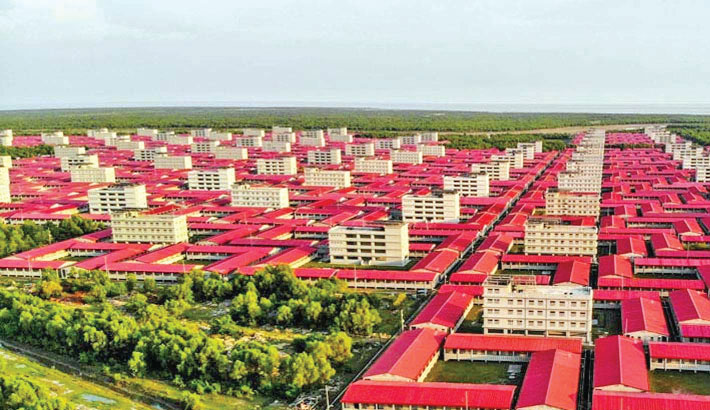 Cox’s Bazar: The process to relocate the Rohingyas to Bhashan Char from overcrowded camps in Cox’s Bazar is likely to begin next week as part of the government’s plan to shift them to the island, reports UNB.

“The exact date for shifting the first batch of Rohingyas to Bhashan Char has not been fixed yet but preparations have been taken to send the first group next week. First, a small group of Rohingyas will be relocated to island and the process will continue,” said Commissioner of Rohingya Refugee Repatriation Commission (RRRC) and additional secretary Shah Rezwan Hayat.

These displaced Rohingya people are believed to have become a security threat to regional peace and the host communities as many of them have got involved in criminal activities, and drug and arms trading.

Seeking support from big countries to find a durable solution to the Rohingya crisis, Foreign Minister Dr AK Abdul Momen on October 7 last said, “We’ve long been saying that uncertainty might be created in the region if the Rohingya crisis is not resolved." The government has information that trafficking of girls and children was taking place and traffickers share images of girls and children through smartphones using high-speed internet as part of trafficking, he said.

Nur Mohammad Shikdar, general secretary of Ukhiya Rohingya Repatriation Movement Committee, said: “The relocation process could have been started long ago had a vested quarter of them not gone against the move at the provocation of some international organisations.” He stressed the need for implementation of the government plan to relocate one lakh Rohingyas to Bhashan Char. Visiting the camps and talking to some Rohingyas, the UNB correspondent found a greater number of Rohingya people willing to be shifted to Bhashan Char due to uncertainty over their repatriation to their homeland.

Wishing anonymity, a resident and also leader of a shade in Kutupalong Rohingya Camp, said, “They’re going through an unimaginable suffering as some Rohingya criminals torture them. They want to return to their own country and are also ready to be shifted to Bhashan Char and stay there until the repatriation begins.”

As part of the government move to relocate Rohingyas to Bhashan char, a delegation of Rohingya leaders along with the representatives of 22 local and international NGOs have visited Bhashan Char recently.

Saiful Islam Kalim, executive director of local NGO Pluse-Bangladesh, said, “The propaganda against Bhashan Char is totally false and fabricated. I myself visited Bhashan Char. Had I not visited the island I might have been confused with the propaganda. The government has created a wonderful environment there for Rohingyas where many NGOs have expressed their keenness to work with Rohingyas.” Bangladesh is now hosting over 1.1 million Rohingyas and most of them have entered the country since August 25, 2017.

Bangladesh and Myanmar signed a repatriation deal on November 23, 2017.

On January 16, 2018, Bangladesh and Myanmar inked a document on “Physical Arrangement”, which was supposed to facilitate the return of Rohingyas to their homeland. But no Rohingya has been repatriated so far.