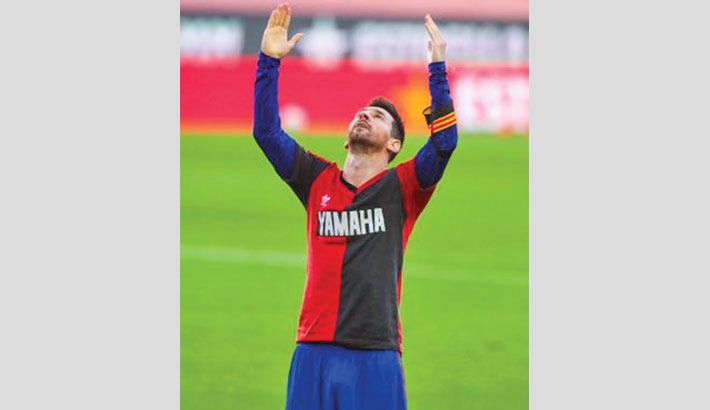 Clubs across Europe continued to pay tribute to Diego Maradona on Sunday with particularly poignant moments in Italy and Spain where the Argentine played.

Maradona, who played two seasons for Barca, one for Sevilla and spent seven mostly glorious years at Napoli, died on Wednesday aged 60.

Barcelona played on Sunday afternoon while Napoli held an elaborate and emotional tribute before their game in the evening.

Before Barcelona faced Osasuna, the club played 'The Song of the Birds' by Catalan cellist Pablo Casals as the teams stood around the centre circle where a Maradona shirt was laid on the centre spot.

Flags at the Camp Nou flew at half mast, Maradona's image was displayed on every screen and digital advertising hoarding, while a club official held a framed Maradona Barcelona shirt. Messi got his goal in the 74th minute with a dazzling strike that sealed a 4-0 victory.

The Argentine picked up the ball in midfield, danced past two defenders and smashed a rising left-foot shot into the top far corner. He celebrated by pulling off his Barcelona shirt to reveal a vintage Newell's Old Boys jersey from Maradona's one season with the club in Rosario, Argentina.

Earlier this week, Newell's tweeted a photograph from Maradona's debut showing a six-year-old local prodigy, in a similar black and red shirt, doing ball tricks for the crowd at half-time. That boy was Messi.

"It was a great moment," said Koeman. "Leo's goal, his gesture dedicated to Maradona. "It was something very big. We Europeans don't realise how big Maradona is in Argentina."

On Friday, Koeman said the best tribute his team could pay Maradona was to "show what we can do on the pitch".