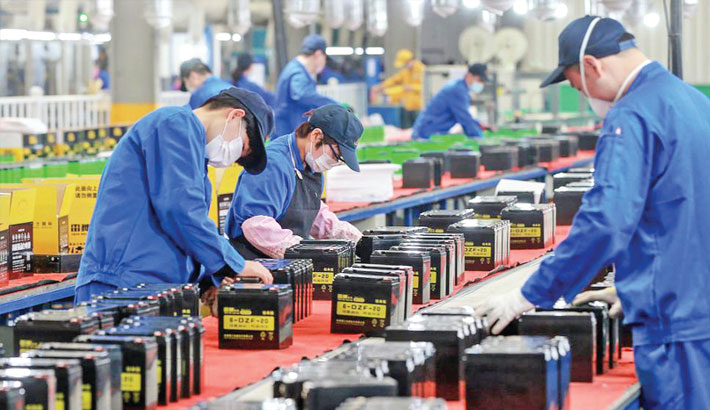 BEIJING: China's factory activity grew at its fastest pace in over three years in November, official data showed Monday, as the world's second-largest economy continued its recovery from the coronavirus.

The Purchasing Managers' Index (PMI), a key gauge of manufacturing activity in China, has largely rebounded following strict measures to curb the virus early in the year, coming in at 52.1 this month, reports AFP.

This was higher than October's reading of 51.4, and remains above the 50-point mark separating growth from contraction.

The latest figures also bring the PMI data back to levels seen in September 2017. Analysts said improvement in both domestic and external demand boosted manufacturing activity.

"This suggests that China's exports continue to benefit from strong foreign demand for Chinese-made goods beyond Covid-19 related products, although fresh lockdowns abroad might have boosted demand for shipments of the latter."

Zhao Qinghe, senior statistician at the National Bureau of Statistics, which publishes the PMI, said Monday both the production and new orders indexes edged up.

Both sub-indexes fared well in industries relating to high-tech manufacturing such as pharmaceuticals, electrical machinery and equipment, he added.

But recovery in the manufacturing industry remains "uneven", Zhao said. Official data showed that small enterprises, which were hurt more by the outbreak, continued to lag behind large businesses.

China is expected to be the only major economy to record positive growth this year.

The non-manufacturing PMI came in at 56.4 in November, slightly higher than the month before, signalling further recovery in the services sector.

Lu Ting, chief China economist at investment bank Nomura, said Monday that China's domestic recovery was on track thanks to its Covid-19 containment, although "an extended pandemic may eventually dampen demand for China's exports if the purchasing power in overseas economies diminishes".

While there were sporadic virus outbreaks in Shanghai, Tianjin and Inner Mongolia, which Lu earlier said could slow recovery in service industries, the impact appears "limited" for now.