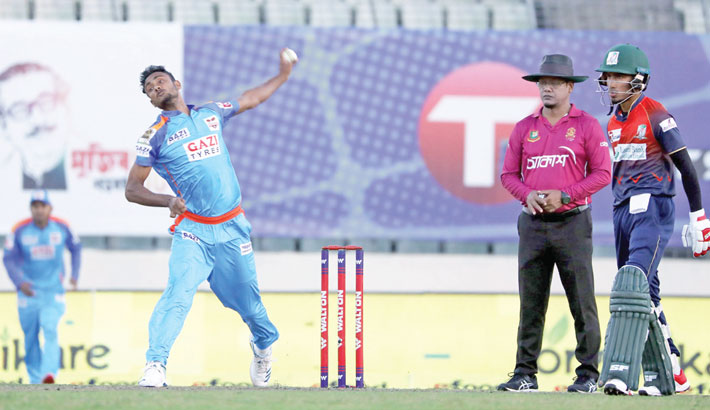 Gazi Group Chattogram put up a collective effort to secure their third straight win in the Bangabandhu T20 Cup as they defeated Fortune Barishal by 10 runs at Sher-e-Bangla National Cricket Stadium in the capital on Monday.

Chattogram were struggling at the halfway point in their innings as they kept losing wickets in regular intervals but two cameos from Mosaddek Hossain and Saikat helped their team go past 150 runs which proved enough for a win.

Saikat hit 3 sixes and Mosaddek also contributed with an important knock of 28 runs from 24 balls while opener Liton Das topped the scorecard with 35 runs 25 balls.

Earlier, Chattogram won their first two matches by a 9 wickets but this time they were sent to bat first for the first time in this tournament after losing the toss.

“The way the team have played was very impressive. Everyone has done their job pretty well, especially Saikat Ali, who was playing his first match but batted really well and I am happy with his performance,” said skipper Mohammad Mithun.

“Although we planned to stay put in the middle, we lost a few wickets in quick succession early in the innings. If we want to win the tournament, we have to win close games. Bowlers did exceptionally well and we will have to depend on what we have,” he added.

Chasing 152, Barishal again opted with their makeshift opener Mehedi Hasan along with Tamim Iqbal but the pair could not last long as Mehedi got dismissed for 13 runs.

Barishal had hopes of chasing the total as long as Tamim was on the crease, but after his dismissal in the 11th over after a run-a-ball 32, Barishal lost their way in the chase.

The rest of the batting line-up couldn’t keep up with the climbing run-rate as Barishal lost their second game in three matches.

Tamim was visibly upset with this outcome and felt that they needed to put a stronger fight.

“I felt that they started very well and we came back well after that. The wicket wasn’t great for batting and at the end of the day, we gave away some 15 runs. The dropped catches became important too and then the three sixes in an over. We had to pay for those,” said Tamim.

“We are playing a game and the players can’t be blamed as its part of the game. We lost wickets regularly after a good start with the bat. The wickets of Hridoy and Afif in particular were important since at that time the game was in our hands,” he said.

“The thing is that we have to enjoy the game without bothering about the results. We had a difficult first game and we came back well after that but today we lost again. I am certain we learned something from this since the game was never too far away from us,’’ he said.

Nonetheless, Tamim was not too interested in blaming anyone as he took the responsibility upon him.

“Obviously, I think getting out for 20-30 runs is a crime, especially in T20. We played enough deliveries to understand the wicket. As I said, it wasn’t the best wicket to bat on but I think either me or Afif should have finished the match. We were the experienced ones in the side and should have taken the responsibility of winning the match,” he concluded.