Mominul ruled out of Bangabandhu T20 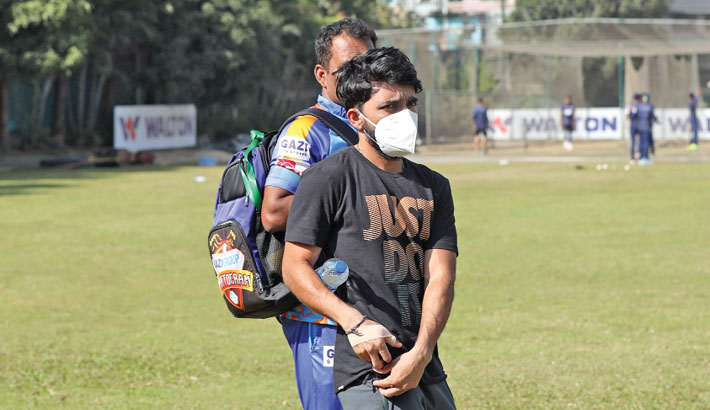 High-flying Gazi Group Chattogram despite Mominul Haque's blow are determined to play an aggressive brand of cricket as they are preparing to take on spirited Fortune Barishal in the Bangabandhu T20 Cup at the Sher-e-Bangla National Cricket Stadium today.

In the other match of the day, Beximco Dhaka and Gemcon Khulna will be desperately looking forward to getting back on business after successive defeats in their previous game.

Chattogram had a major injury blow as Mominul Haque injured the finger of his right hand during their last game and as a result ruled out from the tournament while they can take comfort from the fact Mahmudul Hasan is back after returning from coronavirus.

“Yes he is ruled out from the tournament for fracturing his index finger of right hand. We had an x-ray and there was a fracture and as it will take at least four to six weeks to heal we have ruled him out of the competition,” Chattogram’s team physio Enamul Haque confirmed The Daily Sun on Sunday.

“Mominul injured his finger while fielding but didn’t feel any pain and as a result came into bat but after returning back to hotel condition of his finger started to deteriorate,” he said.

“Mahmudul had tested corona negative twice and as a result joined us in the practice,” said Enam.

Despite the absence of Mominul, Chattogram looked to be in a jovial mood during their training session though last match hero Liton Kumar Das and Mustafizur Rahman didn’t come for the training session.

“I think we will continue to play an aggressive brand of cricket,” Chattogram left-arm spinner Taijul Islam told reporters at the BCB academy premises ahead of their next game.

Taijul credited their bowling unit for coming up with a unified effort that helped them bundle out star-studded Khulna and Dhaka inside 100 runs but added batsmen also played their part perfectly.

“I think it is not only the bowlers who are doing well but we must also give credit to our batsmen because earning nine wickets win (in both games) is a big achievement,” said Taijul.

“Definitely the bowlers are doing well because picking four wickets for five runs (Mustafizur) is certainly a huge achievement and certainly we must continue to deliver in this manner,” he said.

Barishal skipper Tamim Iqbal returned to form with a scintillating half-century against Minister Rajshahi and according to the skipper, this win will help them boost their confidence.

“So far two games have taken place. The senior players you are talking about – are quality players and soon will bounce back. I believe with their experience, they will soon get back in their zone,” said Tamim.

“It was important for me to play a big innings. I failed to score big in recent past so I feel happy to play a knock like this as it helped the team to win,” he said.

“Usually, night games do have a dew factor and spinners face issues with that to grip the ball. When their spinners were bowling in the latter half, we felt difficulties in batting as well. Our four pacers did really well. We had some plans before the game which we executed quite well and this is the most important thing. I am happy with the bowlers as everyone contributed well,” he added.

In the other match of the day both Dhaka and Khulna will be eyeing to resurrect their ship as the former lost both their games while the latter earned the last over win in the opening game before losing the remaining two games.

Dhaka will be eyeing to open their account in the tournament.