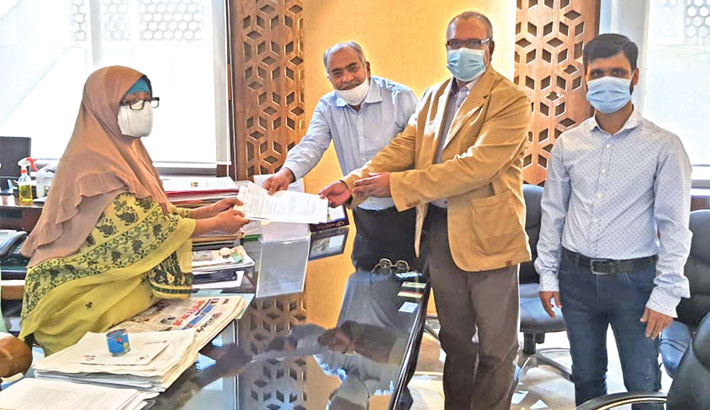 State Minister for Labour and Employment Begum Monnujan Sufian receives a cheque for Tk 9.9 million from LafargeHolcim Bangladesh General Manager ABM Mamun-ur-Rashid at the former’s office in the capital on Sunday.

LafargeHolcim Bangladesh Ltd has contributed Tk 9.9 million from a part of its profit to the Bangladesh Labour Welfare Foundation Fund.

The company’s general manager ABM Mamun-ur-Rashid handed over the cheque to State Minister for Labour and Employment Begum Monnujan Sufian at the Secretariat on Sunday, said a release.

Under the amended labour law, profit-earning companies have to contribute one tenth of 5 per cent of their net profit to their participatory welfare funds as well as the government-formed labour welfare fund.

Till date, a total of 176 companies contributed about Tk 4.90 billion to the fund and around 10,500 workers have received approximately Tk 440 million from this fund.

Meanwhile, a four-member delegation led by former secretary Mahfuzul Haque and Mikail Shipar of Practical Action in Bangladesh handed over a report titled ‘Developing Guidelines for Joint Policy Recommendations on decent Labour Rights of Informal Waste and Sanitation Workers’ to the state minister on the occasion.