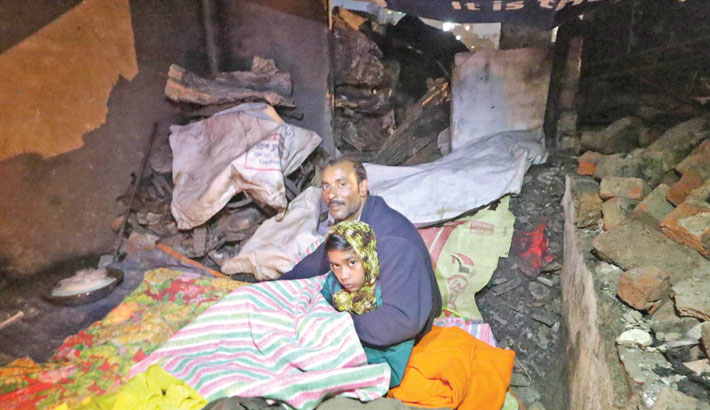 Life After A Fire : A man along with his child wraps themselves up with a blanket in makeshift shelter erected with polythene tents and bamboo following a devastating fire at Sat Tala slum in Mohakhali on November 23. Around 400 people, who became homeless in the devastating fire, are spending their days under the open sky. The snaps were taken on Sunday night. —Md Nasir Uddin

Swapna Begum and her husband Jahirul Islam migrated to Dhaka in 2017 after Tetulia River erosion in Barishal’s Mehendiganj rendered them homeless.

After a few years of struggle, the couple somehow settled in Mohakhali’s Sat Tola Slum.

Pulling rickshaws Jahirul was maintaining his family while Swapna was working as a tailor to save some money and help her husband to open a grocery shop near the slum.

But fate decided otherwise. On the night of November 23, a massive fire swept through their slum razing 300 shops and shanties to the ground.

When the fire started at about 11:45 pm, Swapna was waiting for her husband to return home.

Sitting on the ground of her fire-ravaged tin shack, Swapna was recounting how she had seen her hard-earned money, television, sewing machine and other household items burning in the wild fire.

While talking to this correspondent, tears were rolling down her cheeks. Hanging a mosquito net her husband was sleeping nearby on a mat under the open sky.

Like them, most of around 400 people who lost roofs over their heads are now battling to fight cold.

Albeit a non-government organisation (NGO) hung a few canopies in the slum area, those are not enough.

Such devastation is nothing new in the city. A total of 30 fire incidents took place in the last 11 months in different slums of the capital.

Whenever a fire breaks out in a slum, authorities concerned form a committee to investigate it, but nothing happens to slum dwellers.

They are forced to enter a battle for survival after the loss of all their valuables and hope.

According to a UNDP report, slum dwellers make up more than 33 percent of Dhaka’s population.

These rootless people pay on average Tk 47 per square foot per month as rent, almost twice the amount a resident has to pay for a formal, decent accommodation in areas like Dhanmondi, said a recent study conducted by a private university.

They also pay excessive amount of money to get basic utility services such as electricity, gas and water.

When the government covers all these costs and the shanty residents take fatal risks living in makeshift infrastructure, the slumlords enjoy all the benefits.

There are nearly 3,400 slums in Dhaka most of which has been built occupying government land illegally.

When asked about the fire incidents in slums and its impact on the slum dwellers, Professor Dr. Shayer Ghafur of the Architecture Department of BUET said, “A big city like Dhaka cannot go without low-income people. They make a significant contribution to the city’s economy. But they are often overlooked. The government has responsibility to rehabilitate them by ensuring safe and low cost housing.”