Wearing of masks on rise amid mobile court drive

Prices of the protective gear shoot up 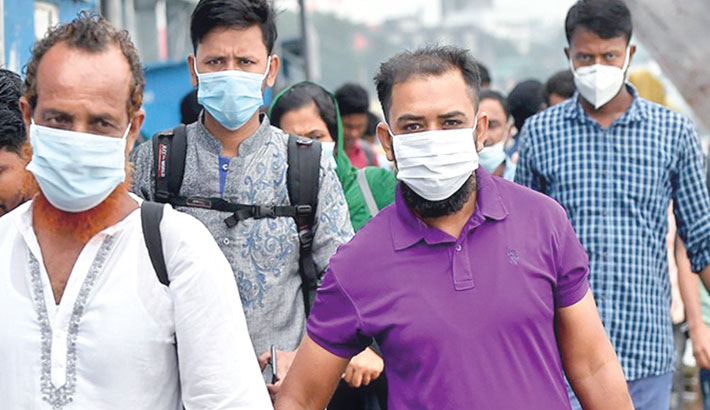 In the face of the on-going massive mobile court operations, people in large number are using face-masks in the capital and elsewhere in the country, causing a crisis and price hike of the item in the market.

Meanwhile, different law enforcing agencies have also intensified their drives against people not wearing masks in public places amid their reluctance to follow the COVID-19 health protocol.

Prices of face masks have almost doubled overnight, following an increasing number of the coronavirus cases and deaths in the country.

Without giving any explanation for the abnormal price hike, the retailers pointed fingers at the wholesalers.

Street vendor Akbar Hossain, was found selling masks at Panthapath at Tk 10 each, which was sold Tk 5 a piece earlier.

“The wholesalers hiked the price. So I could not buy any because of the high price. Now am selling face mask from my stock,” he said.

Hawker Alamgir at Rampura Bazar said: “I bought these from Gulistan Market. They are charging a higher price.”

Though masks were available at high prices on footpaths, most of the drug stores were found to be out of stock. Being panic to be rounded up or to be fined by the mobile courts, most of the people are now coming out their residences and thronging on city-streets, offices, shopping malls and even bus, launch, railway and launch terminals with face masks. Passengers of different public transports are also using face masks more now than the previous weeks.

Public transport staffs and its passengers plying on different city-streets on Sunday were also found travelling with wearing masks which was a rare case in the last several months.

While visiting many crowded places including bus terminals, shopping malls and even footpath in the capital on Sunday, most of the people were found using masks.

The mobile courts comprising magistrates and law enforcers went for the stern action recently after the government asked the field administrators to strengthen operations of mobile courts.

Mobile courts have been carrying out different operations in the capital and elsewhere in the country for the last couple of days to enforce health guideline including using masks. The courts are conducting separate drives also fined many people for not using masks, sources said.

‘The field administrations have been directed to take appropriate measures for the enforcement of the law and conduct massive awareness campaign among the people to make sure people follow the health guidelines properly particularly about wearing masks,’ police sources said.

‘If the people come to know that some people are being punished through mobile courts in transports, markets and other places for not wearing masks, they will become aware of it,’ police said.