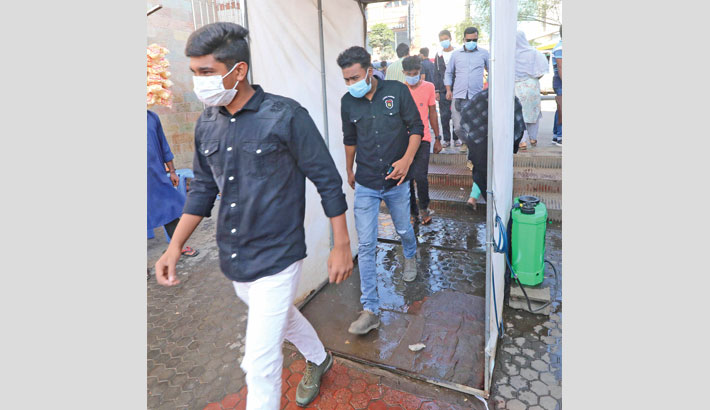 Disinfection chambers or tunnels installed in many establishments across the country as a preventive measure against coronavirus are harmful for public health.

Health experts said various harmful chemicals are being used in disinfection tunnels or chambers, which may seriously affect anybody while passing through them,

According to World Health Organisation (WHO), “spraying of individuals with disinfectants (in tunnel, cabinet or chamber) is not recommended under any circumstances.”

“This practice could be physically and psychologically harmful and would not reduce an infected person’s ability to spread the virus through droplets or contact. Even if someone who is infected with Covid-19 goes through a disinfection tunnel or chamber as soon as they start speaking, coughing or sneezing they can spread the virus,” it said.

The WHO further said, “the toxic effect of spraying chemicals such as chlorine on individuals can lead to eye and skin irritation, bronchospasm due to inhalation, and potentially gastrointestinal effects such as nausea and vomiting.”

“In addition to health safety concerns, the use of chlorine in large-scale spraying practices may prevent this resource from being used for important interventions such as drinking water treatment and environmental disinfection of health care facilities,” it added.

Talking to the daily sun about the disinfection chambers, Dr Nazrul Islam, a member of National Technical Advisory Committee on Covid-19, said, “Any chemical if enters into eye, nose and mouth, can be harmful.”

Although a chemical can kill the virus, it may be harmful for human body, he added.

Dr Nazrul also said people who are setting up disinfection tunnels or chambers at their establishments should take prior approval from the health directorate in this regard.

The Directorate General of Health Services (DGHS) has also asked the authorities concerned not to allow spraying disinfectants on human body. The disease control unit of the DGHS on April 16 issued a directive in this regard in a letter to the civil surgeons across the country.

“It is learnt for various sources that bleaching powder solution is being used to make disinfectants. It is extremely harmful for humans, especially eye and mouth," the letter states.

Dr Md Habibur Rahman, Director (MIS) of the DGHS on Friday said the health directorate did not issue any further directive regarding the use of disinfection tunnels or chambers.

“Everyone should be very careful about using disinfectants on human body,” Dr ASM Alamgir, Principal Scientific Officer of Institute of Epidemiology, Disease Control and Research (IEDCR), told the daily sun.

Sources said many offices, shopping malls, markets, bazaars, factories and business institutions have set up disinfection chambers at their entrances and spraying various types of chemicals in the name of disinfection.

Health experts said people should be very careful about using disinfectant chemicals used in such chambers or tunnels as they can cause serious harm to humans, if those enters into eye, mouth, nose or any other inside part of human body.

They said the authorities concerned should create mass awareness and stop frequent use of chemicals as disinfectant and at the same time the government should make the people learn the proper way of disinfection to protect from covid-19.

Sharif Jamil, General Secretary of Bangladesh Paribesh Andolon (BAPA) said, “The government should launch a drive to create mass awareness about the use of disinfectants on human body as spraying wrong chemicals on human body may be seriously harmful.”

The Supreme Court of India in an order in first week of November asked the federal government to issue a directive within a month on banning or regulating the use of disinfection tunnels.