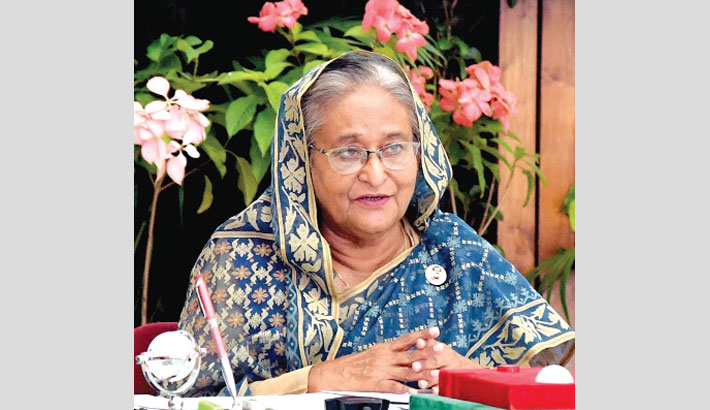 Prime Minister Sheikh Hasina on Sunday said the government will further strengthen the railway communications across the country to ensure transportation of goods and people at a lower cost.

“We have more plans to this end,” she said while virtually laying the foundation stone of the dedicated 4.8-km Bangabandhu Sheikh Mujib Railway Bridge over the Jamuna River from her official residence Ganobhaban.

The prime minister also said the government has a plan to expand the railway network upto Payra Seaport in Patuakhali via Barishal and bring Cox’s Bazar under the railway network with Dhaka via Chattogram. The survey on its feasibility study will start soon.

Listing various development activities, she said her government has been implementing massive programmes for the development of river, air, rail and road communications to make the country’s economy more vibrant in the days to come.

“Today, I’m really very happy. Work on a dedicated railway bridge is going to start over the Jamuna River from today,” Sheikh Hasina said expressing her feelings after laying the foundation stone of the bridge.

Once Bangladesh is connected with the Trans Asian communications networks, the importance of Bangladesh will increase and the overall socioeconomic development will get further pace, she said. “If the communications system is established, the economy will become more vibrant and people will be economically solvent,” she said.

Sheikh Hasina said her government has not only initiated to construct the Bangabandhu Railway Bridge over Jamuna, it also erected separate bridges over the Teesta River apart from bridges at Bhairab and Kalurghat. “In this way, we’ve been working to upgrade and modernise the communications system alongside making those multipurpose so that those can play a significant role in people’s socioeconomic advancement,” she said.

Mentioning that the World Bank earlier rejected her proposal of building railway lines on the Bangabandhu Multipurpose Bridge over the Jamuna River terming it nonviable, she said her decision later proved viable following the construction of the rail lines on the bridge and the global lender expressed its desire to build a railway bridge over the Jamuna. “The country is ours. So, we have to think how we can develop our country,” she said.

Pointing at the post-1975 governments, particularly the BNP ones, the prime minister said they did never think of people’s welfare and the country; rather they engaged in making quick buck and giving blind support to the advice of others regarding the country’s development schemes.

She came down heavily on BNP for its attempt to destroy the railway communications to give their men scope to do transportation business.

Sheikh Hasina said BNP had shut many railway stations and gave ‘golden handshake’ to over 10,000 skilled railway workers in a move to cripple the railway communications.  “The then BNP government was almost going to strangle the railway. After assuming office in 1996, we gave life to it. Now, people are depending on the railway the most,” she added.

She hailed the railway as it has been giving the highest service in case of transportation of goods and passengers during the coronavirus pandemic.

Describing Japan as a true friend of Bangladesh, the prime minister said it always extends its hand wholeheartedly to support the government’s efforts to ensure overall development of the country, expressing the hope that its support will continue in the days to come.

Railways Minister Nurul Islam Sujan and Japanese Ambassador to Bangladesh ITO Naoki spoke at the function from the Tangail and Ganobhaban ends respectively.

The main bridge will be constructed under two packages. Two separate agreements have already been signed with Obayashi-TOA-JFE, Japan and IHI-SMCC JV, Japan for eastern and western parts of civil works respectively.

As per the agreements, land was handed over to the both contractors in July last.