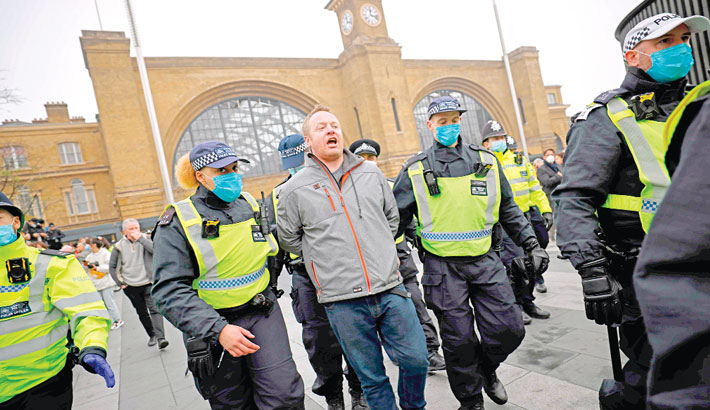 Police officers wearing protective face coverings to combat the spread of the coronavirus take away a protester ahead of an anti-lockdown protest against government restrictions designed to control or mitigate the spread of the novel coronavirus at Kings Cross station in London on Saturday. – AFP PHOTO

PARIS: Coronavirus deaths topped 400,000 on Saturday in Europe, the world’s second worst-hit region, as parts of the continent began to reopen shops for the holiday season, reports AFP.

The densely populated Los Angeles county meanwhile announced a ban on gatherings of people from different households under a new “safer-at-home order” to battle the pandemic surging across the United States.

Most nations hope to ease their virus rules for Christmas and New Year, allowing a respite before bracing for what the world hopes is one last wave of restrictions until a clutch of promising new vaccines kick in.

Europe on Saturday crossed a grim barrier, registering 400,649 deaths according to an AFP tally at 0800 GMT.

Stores were due to lift their shutters in France on Saturday, while Poland’s shopping centres will also reopen. Belgium will allow shops to reopen from December 1, but keep the current semi-lockdown in place possibly until mid-January. The move mirrors similar easing in Germany, Luxembourg and the Netherlands.

Ireland has also announced a staggered easing of restrictions to allow some businesses to reopen and for families to gather ahead of Christmas.

Taoiseach Micheal Martin said the upcoming festive period “cannot and will not be the kind of Christmas we are used to” but added the easing of restrictions would offer “some respite from the hardships of 2020 and in particular, the last six weeks”.

Germany, once a beacon of hope in Europe’s coronavirus nightmare, logged more than one million cases on Friday. Although the virus spread is slowing thanks to weeks of tough restrictions, Europe remains at the heart of the pandemic, recording more cases than the United States in the past week.