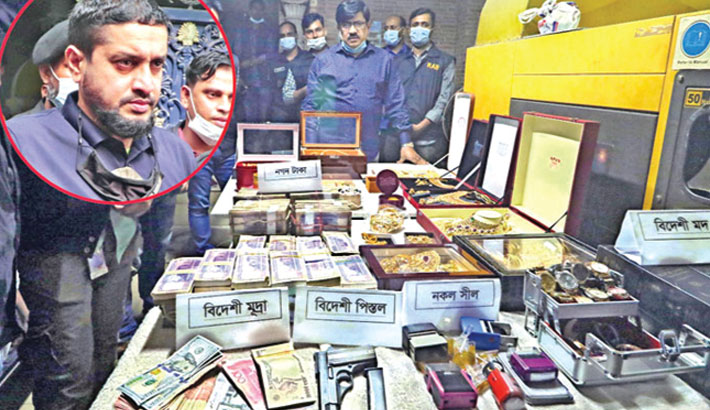 The economy is the main driving force of a country. The overall development and prosperity of a country depends on the transparency of its economy. But when opacity enters the country's economy, when the fortunes of the economy are trapped in the net of the smugglers, the overall development of the country is hampered. Billions of revenue money of the country's economy are looted because of smuggling. As a result of the immense loss due to smuggling, the wheel of prosperity is not turning in our economy.

We generally think that smuggling is the import of illicit goods, gold, and other substances that are harmful to public health, such as drugs or alcohol. But according to "The Customs Act-1969," there is a definite definition of smuggling.

Among the laws in force in the country, only the Customs Act defines 'smuggling'. As a result, law enforcement agencies conduct anti-smuggling activities across the country, mainly on the basis of the customs laws. Under this law, smuggling means importing any product without paying the duty levied on it. It also includes a number of items, such as drugs, narcotics or psychotropic substances, gold and silver bullion, platinum, palladium, radium or any precious metals. In addition, conditional or freely imported goods are also considered to be smuggled if they are transported in ships, vessels, aircrafts, baggage or anywhere in the human body without proper payment of the applicable duty.

Needless to say, smuggling never undertaken alone. There is a special group behind it. Because smuggling a product from abroad requires a huge amount of money and the help of internal special powers. This money is smuggled in the name of hundi, over-invoicing, misdeclaration or other means in the name of importing goods from various sources into the country. In other words, the issue of money laundering is also associated with smuggling activities. Smuggling has not stopped even after being caught in raids at different times, the activities of smugglers has not stopped. The amount of smuggling in the country is increasing at a significant rate day by day.

Recently, the activities of a person named 'Golden Monir' in gold smuggling have taken the people of the country by surprise. On November 22, 2020 RAB raided a house in Merul Badda in the capital and arrested one Golden Monir. 600 tolas of illegal gold ornaments (more than eight kg), foreign currencies of 10 countries, Tk one crore nine lakh in cash, five luxury cars and alcohol of foreign brand were seized from his house along with foreign weapons. The seized assets amount to more than Tk one crore 50 lakh. Now Monir is coming to the discussion and questions are being raised about him. How Monir became 'Golden Monir' from a salesman in a clothing store is undoubtedly something to think about. Who are the bosses behind Monir! Under the auspices of whom, the Monirs are becoming the gold smuggling mafia Golden Monir!

From the history of Monir's life, it is known that Golden Monir, who became a gold smuggler and a land grabber, used to work as a salesman in a clothing store in Gausia Market. He then set up a crockery shop in Mouchak. At that time he was in cahoots with the luggage smuggling ring. Then he got involved in the illegal luggage business. Monir's name also came up in the list of the country's biggest smuggling ring. Not only smuggling gold, he also became the owner of innumerable plots through land grabbing. The number of such Monirs in the country is unknown. Many such Monir's vaults are still filled with smuggled wealth. And the likes of these Monirs were not made in one day!

With the cooperation of dishonest airport officials and under the political umbrella, a strong syndicate circle of Monir has been formed. We see often in media reports - "Dhaka and Chittagong airports have become strong bases for gold smuggling. There are gold bars on the seats, toilets, luggage and even on the soles of shoes." The smuggled gold is coming from Dubai, Abu Dhabi, Sharjah, Muscat, Oman, Jeddah, Saudi Arabia and Qatar. The frequency of seizing smuggled gold in the country has increased as compared to the past. According to a statistic, the amount of gold that is being smuggled into the country is also being smuggled out. The government's revenue sector would have been stronger if it had been imported and exported legally. But due to these smugglers, the country's revenue sector is yet to benefit much.

Many smuggling syndicates of arms, drugs, gold and explosives have been formed in the country, which have close ties with international smuggling rings. They have a strong syndicate in the country. If they are not controlled now, this crime will quickly become irrepressible. Then the country's economy will lose more revenue each day.