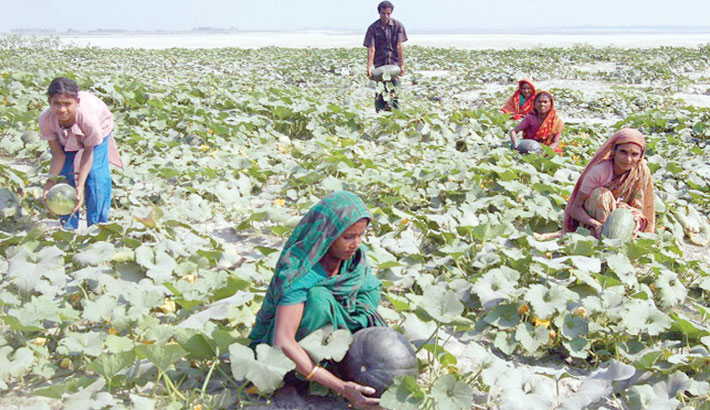 Crops and vegetables farming on river beds has opened up a new horizon in agriculture as farmers are making profit due to bumper production of winter vegetables including some advanced ones, reports BSS.

In order to overcome their financial insolvency, the peasants were seen showing interest to large-scale commercial vegetable farming in vast riverbed areas in the two districts creating a silent revolution there.

While visiting some of the remote and hard-to-reach areas, this reporter witnessed the success of many farmers in cultivating brinjal, beans, cauliflower, cabbage, potato, bottle gourd, tomato and onion.

With cultivating winter vegetables on homestead areas, the farmers planted vegetables on more lands this year compared to the previous years as climate condition remains favourable despite the adverse impact of the novel coronavirus (Covid-19) pandemic.

After meeting the local demands, the surplus vegetables are being supplied to different parts of the country including Dhaka benefiting the consumers in general.

“I have cultivated cauliflower and cabbage on an acre of land by spending Tk 25,000. I expect to get Tk 90,000 by selling those within this harvesting season,” said Abu Bakkar Ali, a farmer of Bazubagha Natunpara village under Bagha upazila.

Chars emerged in the rivers of Padma and Mohananda have been bringing fortune to many farmers in Paba, Godagari and Bagha upazilas of Rajshahi and Sadar and Shibganj upazilas of Chapainawabganj districts for the last few years.

Hundreds of farmers in the two districts are now very happy as deposit of alluvial soil in the char areas have given them an opportunity to cultivate various crops and vegetables in their fields, said Sirajul Islam, additional director of department of agricultural extension (DAE).

All varieties of winter vegetables have now appeared in abundance in the local markets and the yield rates achieved so far are found to be higher than that of the target due to early farming of the vegetables.

Farmers are being made habituated with homestead gardening through establishing projection plots of improved technologies for enhancing vegetable output.

Modern technologies are being transferred to the growers level through farmers training, projection plot, field day and different types of campaign so that the farmers could make their cultivation more effective and profitable.

Agriculturist Islam said emphasis is being given to increase production of high yielding seeds and saplings through extension and application of the high yielding varieties in farmers’ level.