Kangana meets Sanjay to inquire about his health 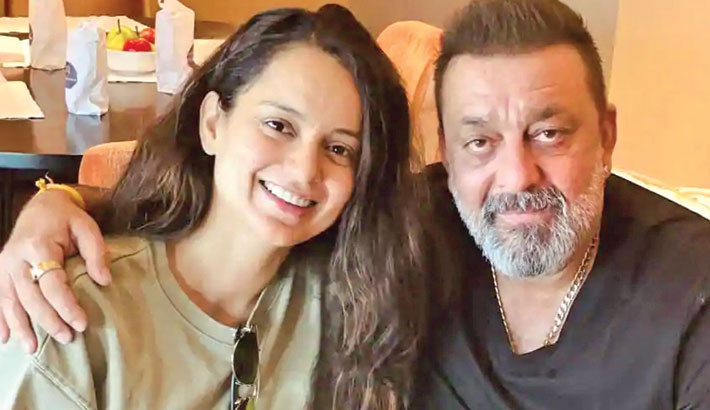 Bollywood actress Kangana Ranaut met actor Sanjay Dutt in Hyderabad this week. She said in a tweet that the two are staying at the same hotel and so she decided to pay him a visit, reports Hindustan Times.

Kangana said in her tweet that he wanted to check on Sanjay’s health. Sanjay was diagnosed with lung cancer, which he successfully beat in September. “When I got to know we were staying in the same hotel in Hydrabad, I went to see Sanju sir this morning to check on his health and was pleasantly surprised to see him look even more handsome and healthy. We pray for your long life and good health,” she wrote in her tweet. The accompanying photo showed Kangana in a sweat suit, smiling while posing with Sanjay.

Kangana has been waging an online war against ‘nepo kids’ and drug use in Bollywood. So a few followers of Kangana did not appreciate her clicking a picture with Sanjay, who is the son of late actors Sunil and Nargis Dutt and had struggled with drug addiction early in his career. Other few fans, however, supported her. “To those commenting negative things please make it clear, her battle is against ideology and not against any individual! Love this picture,” read a comment.

“She just went to check about his health as a collegue. They have worked in past and they were in same hotel and a news channel also said they are living on the same floor. She just checked,” read another.

Kangana is in Hyderabad for the shoot of Thalaivi. She plays the late former chief minister of Tamil Nadu, J Jayalalithaa in the film. Thalaivi has been written by Baahubali and Manikarnika writer KV Vijayendra Prasad and The Dirty Picture and Once Upon a Time in Mumbai writer Rajat Arora. The movie was scheduled to hit the theatres on June 26, 2020, but could not as cinema halls were kept closed in the wake of the coronavirus outbreak.”

Kangana also has Tejas in her kitty, in which she plays a fighter pilot. She recently finished prep work on the movie from her home in Manali.