Bejoy N D'Cruze takes over as Archbishop of Dhaka 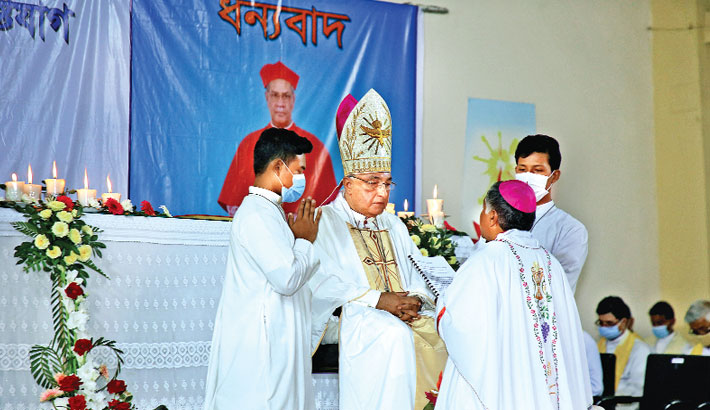 The installation of new Archbishop of Dhaka Bejoy N D'Cruze OMI was held at the Saint Mary’s Cathedral Church in the capital on Friday.

Bishop Bejoy N D'Cruze OMI assumes the responsibility of the Archbishop of Dhaka on Friday.  The Vatican announced his appointment two months ago.

Outgoing Archbishop of Dhaka Cardinal Patrick D' Rozario, CSC, and Vatican’s Apostolic Nuncio to Bangladesh Archbishop George Kocherry, other bishops, priests and members of Christian community were present during the installation ceremony at Saint Mary’s Cathedral Church in the capital.

During the holy mass with limited presence, the newly appointed Archbishop Bejoy N D'Cruze called for unity among people of all churches, religions, caste and creed.

He said, “Jesus Christ spoke of the liberation of all people, not only the Christians. Christianity, thus, is universal. It speaks of serving all.” Archbishop Bejoy, who is also known as an advocate of inter-religious dialogue, is currently serving as the president of the Catholic Bishops’ Conference of Bangladesh.

He has replaced Cardinal Patrick D Rozario, who went to retirement as the Archbishop of Dhaka after completion of his 75 years in September.

Born on February 9, 1956, at Tuital in Dhaka’s Nawabganj, Archbishop Bejoy D'Cruze was installed as a priest on February 20, 1987.

Later, while working as the bishop of Sylhet he contributed a lot in promoting health and education facilities for the people of Sylhet Diocese.