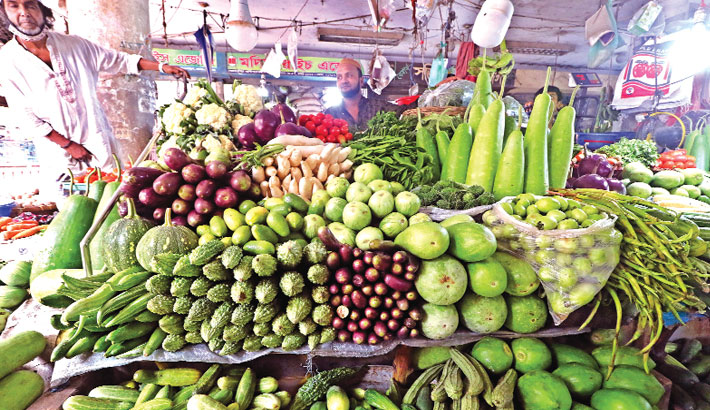 Prices of winter vegetables have dropped slightly while the prices of rice and oil soared in kitchen markets in the capital this week.

The vegetable prices declined by 10 to 20 percent against the prices last week thanks to an ample supply of the produces in the markets. On the other hand, prices of rice and oil have soared.

After visiting several kitchen markets in the capital on Friday, this correspondent found that the prices of vegetables decreased by Tk 10 to 20 per kilogramme.

But prices still remain much higher than that of same period in the previous year. It was found that price of bean was decreased by Tk 10 and it was selling at Tk 50 per kg. Bean was sold by Tk 60 last week while Yardlong bean was selling at Tk 70 which was Tk 80 to 100 per kg a week ago.

Dropping Tk15 in per piece cauliflower was sold at Tk 35.

The price of local onion has dropped a little and was selling at Tk 70 per kg while imported onion at Tk 45 to 50 per Kg.

Per bunch of different kinds of leafy vegetables were sold at Tk 15-20.

The price of local (deshi) fresh water fish has  decreased by Tk 20 to 50 per kg this week as these fishes are caught in big numbers as ponds and other water bodies have begun drying up.