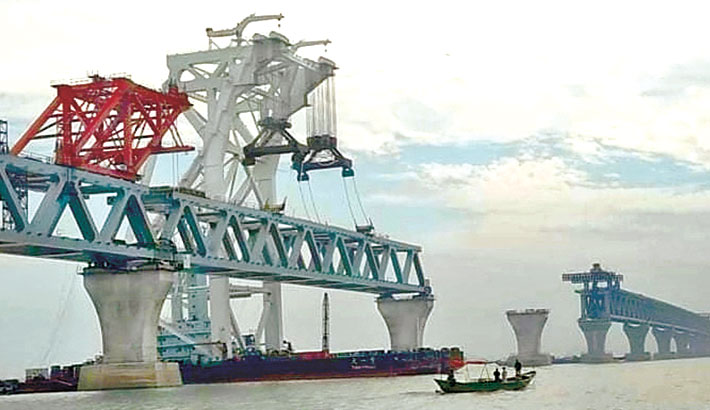 With installation of the 39th span on Friday, only 300-metre stretch of the much awaited Padma Multipurpose Bridge is left to be completed.

With the installation of the span marked as "2-D" on pillars 10 and 11 at Mawa point, 5,850 metres of the bridge’s main structure is now visible.

The 40th span is expected to be installed within December 16. The 6.15km long double-decker bridge has a total of 41 spans in its architectural design, he said.

Trains will run through the lower deck while the road will be on the upper deck of the bridge.

The construction work of the long-cherished Padma Bridge started in December, 2014 and the first span was installed on September 30, 2017. Once the bridge is completed, the capital will be directly connected with 21 southern districts through road and railways.

The main bridge is being constructed by China Major Bridge Engineering Company (MBEC), a Chinese contractor, while Sino Hydro Corporation, another Chinese company, is working on river management.

The bridge is expected to be opened in 2021.