Maradona to be buried in Jardin de Paz cemetery today 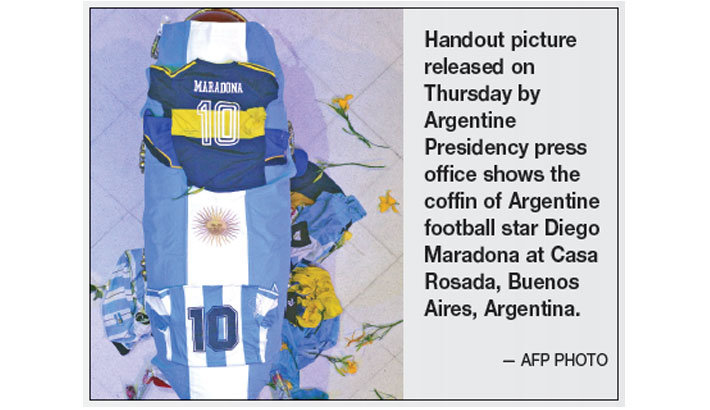 Argentina football legend Diego Maradona will be buried outside Buenos Aires on Friday, his spokesman has confirmed. Maradona, aged 60, passed away on Wednesday after suffering a cardiac arrest, reports agencies. Maradona’s coffin arrived at the presidential palace in Buenos Aires for a period of lying in state on Wednesday.

Maradona will be laid to rest in the Jardin de Paz cemetery, where his parents were also buried, Sebastian Sanchi told AFP.

On Thursday, hundreds of people began filing in to see the coffin of Diego Maradona in Buenos Aires’ Casa Rosada after he passed away on Wednesday at the age of 60. People passed in front of the coffin that was draped with the Argentine flag and his number 10 jersey.

Maradona's family and closest friends came at dawn before the start of the public wake. Tens of thousands of people spent the night in a vigil in the Plaza de Mayo, singing songs in tribute to Maradona, who led Argentina to the World Cup in 1986.

Scores of people, with scarves and Maradona’s shirt, gathered outside Napoli’s stadium and chanted “Diego, Diego, Diego!”  Napoli's blue and white have been hung on the fence, transforming it into a makeshift shrine to the city's adopted "king"

“You are eternal in every heart in world football,” the Twitter account of the Argentina national team posted alongside a picture of Maradona holding the World Cup.