Argentina and the world of football mourn Maradona 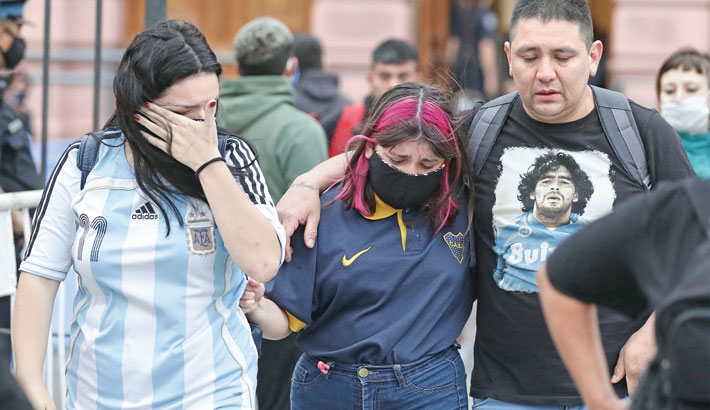 Thousands of Argentines filed past Diego Maradona's coffin in Buenos Aires on Thursday after the country and the world of football was plunged into mourning by his death at the age of 60.

Mourners, many in tears, and many wearing the World Cup winner's number 10 Argentina jersey, gathered at the Casa Rosada presidential palace where the national hero's coffin was draped in the sky blue and white Argentine flag.

Many more will pay homage to one of the all-time sporting greats before his burial on the outskirts of Buenos Aires later on Thursday.

Maradona will be laid to rest in the Jardin de Paz cemetery, where his parents were also buried, his spokesman Sebastian Sanchi told AFP.

Tributes poured in from around the world as supporters, players and government leaders marked the passing of a sporting genius whose career and life was sometimes tainted by a loose interpretation of the rules of the game and a crippling addiction to cocaine.

The outrageously skilful Maradona, widely remembered for his "Hand of God" goal against England in the 1986 World Cup quarter-finals, died Wednesday of a heart attack while recovering from brain surgery, a member of his entourage told AFP.

Family members were summoned to Maradona's home north of the Argentine capital before his death was announced.