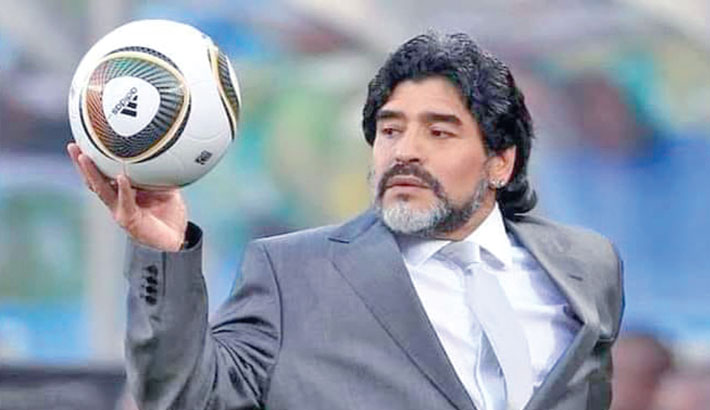 Brazilian great Pele led global tributes to Diego Maradona, whose death was announced on Wednesday, saying one day they would “play soccer together in the sky”.

Renowned for inspiring Argentina to World Cup glory in 1986, Maradona was most loved at club level for his spells with Boca Juniors in his homeland and Napoli in Italy, where he won the club’s only two Serie A titles.

AFP Sport looks at who is saying what as tributes pour in to one of football’s greatest ever players:

"The Argentine Football Association, through its President Claudio Tapia, expresses its deepest sorrow for the death of our legend, Diego Armando Maradona."

“Sad news today. I have lost a dear friend, and the world has lost a legend. There is much more to say, but for now may God give his family strength. One day, I hope, we will play soccer together in the sky.”

— Brazilian legend Pele, who is widely regarded as Maradona’s competition to being called the best player in history.

“It is a very sad day for all Argentines and football. He leaves us but he does not go because he is eternal. I am left with many of the nice moments we shared and I want to send my condolences to all his family and friends.”

— Six-time Ballon d’Or winner Lionel Messi, who played under Maradona for Argentina at the 2010 World Cup, and has struggled to match his success at international level.

“Today I say goodbye to a friend and the world says goodbye to an eternal genius. One of the best ever. An unparalleled magician. He leaves too soon, but leaves a legacy without limits and a void that will never be filled. Rest in peace, ace. You will never be forgotten.”

“What Diego has done for football, for making all of us fall in love with this beautiful game, is unique. It is, as he is, simply immense.”

“You took us to the top of the world. You made us immensely happy. You were the greatest of all. Thanks for having existed, Diego. We will miss you for life.”