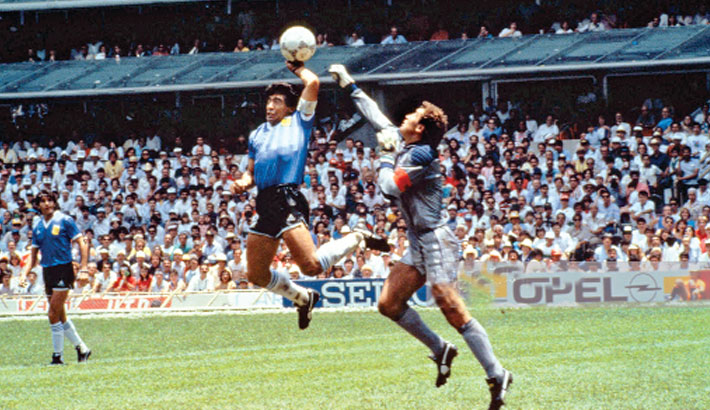 Maradona, centre, in 1986 World Cup, scoring a controversial goal against England that he attributed to divine intervention, calling it ‘Hand of God.’

Bangladesh mourned the death of football legend Diego Armando Maradona who is regarded as one of the greatest footballers of all time.

The football icon, who was known for far more than his infamous 'Hand of God' incident, died at the age of 60 on Wednesday. He suffered a heart attack at his home in Buenos Aires.

State Minister for Youth and Sports Zahid Ahsan Russell said, “The captain of Argentine world cup winning team Diego Armando Maradona was one of the greatest footballers of all time. He had enchanted millions of football fans all over the world with his football magic. Maradona has millions of fans in Bangladesh. He will always be remembered by millions of football fans around the world. Maradona was not only a great footballer, also a successful sports organiser. His work and career will be examples in the history of the world.”

Bangladesh Football Federation (BFF) paid tribute to the legendary footballer Maradona posting one of his popular pictures on their official page on Facebook. Besides, Bangladesh National Football Team also expressed their profound shock at his death.

Captain Jamal Bhuiyan said, “His (Maradona) death is sad news for the world. He was only 60 years old. But it is more painful for footballers because he was an icon for them. He was a legendary player. He won the FIFA World Cup in 1986. He also played for Napoli. He achieved so much in his football career. He has a lot of fans in Bangladesh. Maradona will never be forgotten, he will always be in our hearts.”

Goalkeeper Ashraful Islam Rana, “We lost our legendary footballer Badal Roy just a few days ago, now we lost the greatest footballer of all time, Maradona. His death is an irreparable loss for football. I’m an Argentina fan. I’m really sad. We pray for his departed soul.”

Defender Topu Barman said, “I’m a big Argentina fan and have been supporting them in four to five World Cups. I'm a big fan of Diego Maradona, though I've not seen him play. He made Argentina champion in the World Cup in 1986. It is painful for me to accept the news of his death. All of the members of Bangladesh national team are shocked We pray for him.”

Former national footballer and BFF senior vice-president Abdus Salam Murshedy said, “Bangladesh Football Federation (BFF) and fans are shocked at the death of this football legend. We had planned to invite him to Bangladesh as an Ambassador to mark the 100th birth centenary of Father of the Nation Bangabandhu Sheikh Mujibur Rahman, now that wish of ours will never be fulfilled.”

Another former footballer Sheikh Mohammad Aslam said, “We don’t know when we will get a chance to see a footballer like him again. He is a charismatic character, he won the world with his performance.  He was a superstar in the 80s and 90s, we are sad and we pray for him. He belonged to a poor family. He won poverty and then won the entire world with football. He will always be remembered. We got him when Bangladesh football was going into the golden period. We got inspiration from him. We were astonished with his skills and tactics.”

Bangladesh Cricket Board (BCB) also paid tribute to Maradona observing one minute silence in the ongoing Bangabandhu T20 Cup at Sher-e-Bangla National Cricket Stadium on Thursday. Cricketers from all the four teams namely Dhaka, Rajshahi, Khulna and Barishal observed one minute’s silence after the opening game of the second day’s fixture.

All-rounder Shakib al Hasan said, “There are players who are iconic to each generation and then there are players who transcend generations and become icons of the game itself. Diego Armando Maradona was a player who personified football. He was as famous on the pitch as he was infamous off it. He did everything his own way - right or wrong. What can't be denied is his unbelievable talent, football acumen and love for the game. Football will continue to grow and amaze us because of legends like him.”

Former ODI captain Mashrafe Mortaza said, “To me there was no super star than you (Maradona) and there won’t be anyone in future as well. Personally speaking you (Maradona) are the only superstar with whom I wanted to meet. The picture of your goals that you scored through your left leg will remain in my memory forever. Stay well in the heaven magician. The dribbling master.”   Wicketkeeper-batsman Mushfiqur Rahim said, “A legend who inspired generations. Rest in peace, Diego Maradona.”

South Asian Games gold medalist weightlifter Mabia Akhter Simanta said, “This year is an unlucky year for us. We lost many famous sporting personalities this year.  We lost one of our legendary footballers just a few days ago and now Maradona died. He was my favorite footballer, though I have never got a chance to see him play live.  But I see highlights of his matches.”

Shooter Abdullah Hel Baki said, “He was almost everyone's favourite footballer, and was the king of football. His death is a profound shock for the entire arena of world sports.”