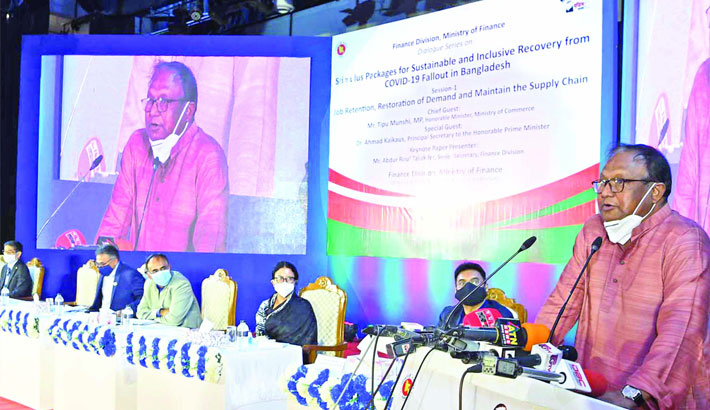 “Bangladesh economy has made a turn around after successfully facing Covid-19. Business and trades in now running. The situation is improving as the people are getting aware by the government efforts,” Tipu Minshi remarked on Thursday.

For continuation of the success story, he also called for stepping up coordinated efforts to tackle the second wave of coronavirus and recover the dented economy.

The commerce minister was speaking as the chief guest at a dialogue on ‘Job Retention, Restoration of Demand and Maintain the Supply Chain’ held at Osmani Memorial Auditorium in the capital.

It was the first of a series of dialogue being held under the banner of ‘Stimulus Package for Sustainable and Inclusive Recovery from COVID-19 Fallout  in Bangladesh’ that the govering is holding to create awareness about its stimulus package.

Mentioning that the government has announced 21 stimulus packages worth Tk 1.21 trillion for economy recovery, Tipu Munshi said: “The steps were very crucial to an emerging economy like Bangladesh.”

With the timely initiatives, the government has been able to keep production, supply and prices of essential commodities normal during the pandemic, he claimed, adding that TCB’s open market sale of commodity helped curb any supply crunch even in the tough time.

Tipu said Bangladesh’s stimulus packages have been provided in the form of low-cost loans to affected micro, small, medium and large industries and services, food security, social protection, special allowances and incentives as the pandemic-induced shutdown or struggling industries.

He emphasised on proper implementation of packages as directed by the Prime Minister and simplification on money disbursement procedure, so that targeted groups get the benefits of the packages.

“If we continue our business activities, our people can get money and the wheel of the overall economy of our country will remain in motion,” he added.

Ahmad Kaikaus said the country’s economy is bouncing back quickly from the coronavirus (COVID-19) related impact, backed by different time-befitting policy supports of the government.

Immediately after the outbreak of COVID-19 in March, the government rolled out a raft measures to help boost the economy and with the government’s policy support, Bangladesh is returning quickly to previous position, he added.

The finance secretary said that  Bangladesh initiated proactive and prompt policy measures since the beginning of the pandemic under the direct intervention, prudent guidance and close supervision of Prime Minister Sheikh Hasina.

“The design and implementation of the responses was possible to materialize due to the some factors, including sound macro-fiscal position maintained over the last 12 years,” he commented.

Low level of debt to GDP ratio, higher capacity to borrow from domestic and international sources;

He also acknowledged that timely and generous response from the development partners was instrumental in rolling out stimulus packages.

“Positive contribution of the government responses is evident from the signs of economic recovery,” he said.

Naznin Ahmed underscored the need for increasing the allocation of Palli Sanchay Bank, Palli Karma-Sahayak Foundation (PKSF) and such kind of organisations so that marginalised people can take benefits from the government’s stimulus packages.

Rubana Huq said if the RMG sector can survive up to June, 2021, then the sector can go forward and it will have no need any reward.