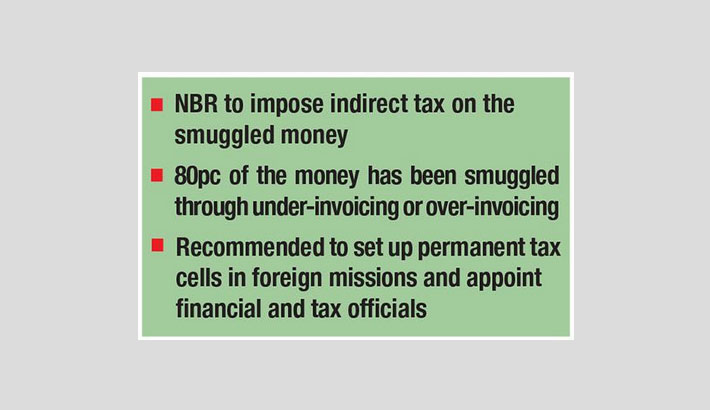 The government is going to impose indirect tax on the smuggled money as part of its tax recovery measures as a huge volume of money is being siphoned off from the country every year.

The National Board of Revenue (NBR) has taken the initiative to collect indirect tax on the smuggled money with the assistance of the customs department of other countries.

It is very difficult to return the money once smuggled abroad. There is no legal framework on what alternative steps can be taken if the money cannot be returned.

A proposal has been placed at a recent meeting of NBR on tax recovery from the smuggled money and policies to prevent money laundering.

In light of this, a report titled ‘Indirect tax collection in case of tax recovery on smuggled money and assets’ was prepared by the Customs Intelligence and Investigation Department.

The meeting was informed that some 80 per cent of the money has been smuggled through under-invoicing or over-invoicing.

NBR has mutual administrative assistance agreements with customs departments in other countries for cooperation in various fields, meeting sources said.

Bangladesh can follow the mechanism of developed countries for tax recovery on the smuggled money, officials concerned said.

A huge amount of money is being smuggled from the country in various means and schemes to countries like including Canada, UAE, Hong Kong, Singapore, United States, United Kingdom and Australia.

Even the money has been invested in businesses, houses, cars and various assets in different countries. Besides, the money is also being deposited in the banks of those countries.

Due to the smuggling of a huge amount of money, Bangladesh is being deprived of huge revenue and domestic investment.

It has been recommended to set up permanent tax cells in foreign missions and appoint financial and tax officials. In doing so, the concerned authorities can take initiatives to find the source of the money laundered from various sources, NBR proposed.

According to the latest report of Washington-based Global Financial Integrity (GFI), Bangladesh lost a staggering Tk 63,924 crore ($7.53 billion) a year between 2008 and 2017 to trade misinvoicing.

It also said the average value of Bangladesh’s trade misinvoicing was 17.95 per cent of the country’s total trade with 135 developing countries and all of its trading partners during the same period.

Earlier in July, Bangladesh Financial Intelligence Unit (BFIU) at a meeting with Anti Corruption Commission, NBR, CID and other agencies had discussed various issues including preventing money laundering, tax recovery on smuggled money and other policies.

Following the discussion, NBR proposed to impose indirect tax on smuggled money and other ways to prevent under-invoicing or over-invoicing.