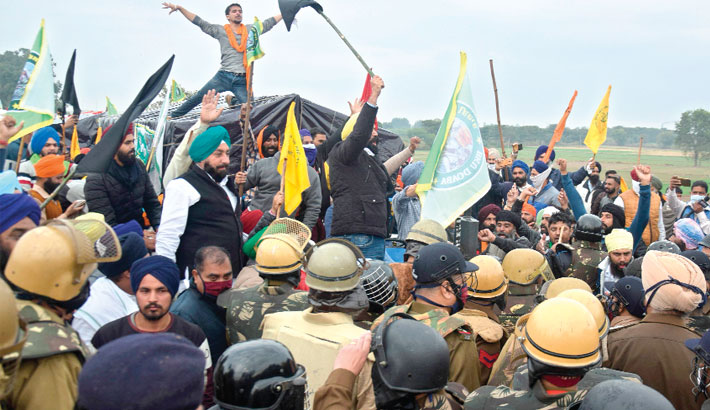 NEW DELHI: Thousands of Indian farmers clashed with police in northern Haryana state on Thursday during a protest demanding that the government abolish new farming laws that they fear will reduce their earnings and give more power to corporations, reports AP.

The farmers, who were traveling toward the capital, New Delhi, on tractors and motorbikes, flung police barricades into a river and threw bricks and stones at the officers near Ambala district. Police halted them by firing teargas and water cannons.

There were no immediate reports of injuries. “Such kind of injustice toward farmers is not fair. Peaceful protest is their constitutional right,” New Delhi chief minister Arvind Kejriwal said in a tweet.

Hundreds of police were also deployed at the border between New Delhi and Haryana to block the protesters.

The farmers say the farming laws, which were approved by Parliament in September, could cause the government to stop buying grain at guaranteed prices and result in their being exploited by corporations that would buy their crops at cheap prices.

The government of Prime Minister Narendra Modi has said the laws are aimed at reforming India’s farming sector by giving farmers the freedom to market their produce and boosting agricultural growth through private investment.

For the last two months, farmer unions unwilling to accept the laws have camped on highways in Punjab and Haryana states. In an attempt to pacify them, the federal government has called leaders of the farmers to a second round of negotiations on Dec. 3 after the first round failed last month.

Opposition parties and some Modi allies have called the laws anti-farmer and pro-corporation. Days after the laws passed, Shiromani Akali Dal party lawmaker Harsimrat Kaur resigned as minister for food processing. Her party was one of the Modi government’s most trusted allies.

Farmers have long been seen as the heart and soul of India, where agriculture supports more than half of the country’s 1.3 billion people. But farmers have also seen their economic clout diminish over the last three decades. Once accounting for a third of India’s gross domestic product, they now produce only 15% of the country’s $2.9 trillion economy.