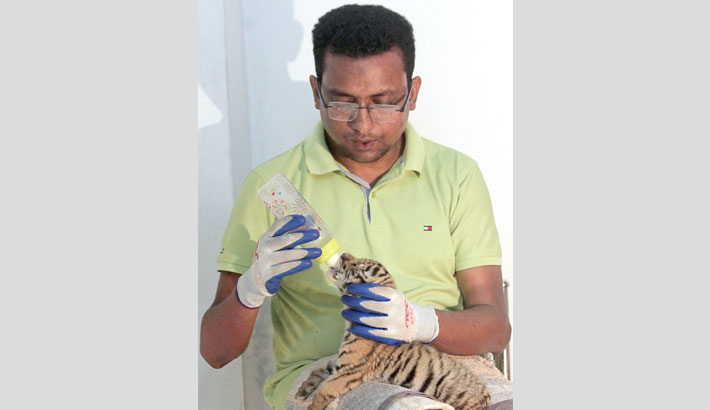 A tiger cub is being fed at Chattogram Zoo.

CHATTOGRAM: The lone surviving tiger cub which along with its two dead siblings was refused breastfeeding by their mother Joya at Chattogram Zoo is still not out of danger.

The zoo authorities are taking additional care of the cub and bottle-feeding it in a separate room in their desperate attempt to keep it alive.

However, two of them died -- one on November 15 and the other on November 18 -- as their mother did not breastfeed them since their birth, he said.

“We’re bottle-feeding the living one keeping it at a separate room. The male cub of Bengal Tiger species weighing around 1.3 kgs is still at risk and it can’t be declared safe before one month,” Dr Shuvo told the Daily Sun.

With the cub, the number of tiger and tigress stands at six at the zoo. Four of them are females.

A tiger and a tigress, aged 11 and nine months respectively, were brought for the zoo from South Africa on December 9, 2016 at a cost of Tk 33 lakh. They were named Raj and Pori.

The tiger couple gave birth to three cubs, including two rare white ones (albino), in 2018 but one of the cubs died a day after its birth. They also gave birth to two more cubs in 2019 and one of them died after the birth similarly.

Meanwhile, the lone white tigress, Shuvra, sister of Joya, is also pregnant and the zoo authorities are waiting to welcome more new guests.

There are now some 620 animals and birds of 66 species at the zoo which remains open for visitors from 8am to 6pm every day.

Chattogram Zoo was established on 10 acres of land in the city’s Foy’s Lake area in 1989.