Serve the nation with patriotism 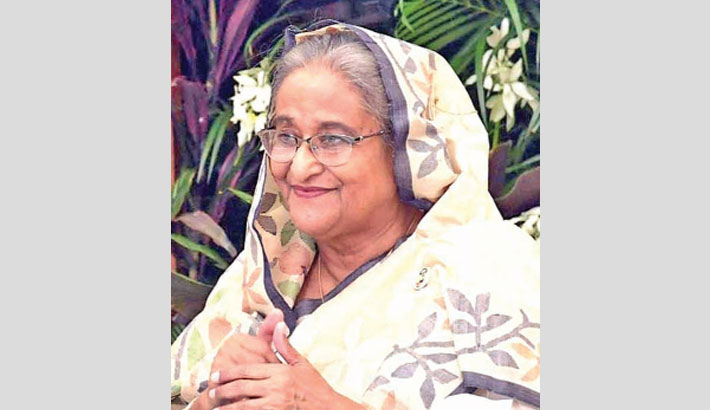 Prime Minister Sheikh Hasina on Thursday urged the civil servants to work for the people and serve the nation by utilizing their wisdom, intellect and talent being imbued with the spirit of patriotism, reports BSS.

“Think about the people’s welfare. Work for them and ensure justice for all,” she said while addressing the certificate-giving ceremony of the 116th, 117th and 118th Law and Administration Training Courses at Bangladesh Civil Service (BCS) Administration Academy at Shahbagh through a virtual platform from her official residence Ganabhaban.

The head of the government expected that civil servants would never look down the common people and show due respect to them as human beings.

“Work with patriotism so that the country’s people can stay safe and have a better life keeping their heads high in the world arena,” she added.

The incumbent government wants to train the qualified officers and employees for building the nation so that the country can keep pace with the world, the premier said.

“After assuming the office, the Awami League government is sending officers and staff of the administration abroad to have professional trainings,” she added.

“You do the job. These poor farmers pay you. Poor workers pay your salary. Your family lives on their money (Taka). I ride the car at their money. Speak with due honour to them, speak with respect.  They are the owners,” daughter of Bangabandhu quoted the Father of the Nation as saying at an address to the government employees at Suhrawardy Udyan on March 26, 1975.

Recalling her childhood memories Sheikh Hasina said, “We have learned in the childhood from our parents that we ought to show respect to all domestic maids or rickshaw pullers or drivers as well”

The prime minister thanked the new officers and others concerned for completing a successful professional courses, where a total of 116 cadre officers – 70 males and 46 females – took part in the training courses, through online classes amid the COVID-19 pandemic.

“You also need to take appropriate action against the incidents of crime from time to time, including violence against women, rape, juvenile crime, drug abuse, terrorism, militancy and corruption. Treat a criminal as a criminal. This is my word,” the prime minister said.

She categorically said, “No matter what party a criminal belongs to or whoever he or she is, the society needs to be built well by taking action against the perpetrators as criminals. We want to do that.”

Referring to the certified administrative officials, the prime minister said, “You have trained and achieved success even in these corona situation and therefore, you must use the acquired knowledge for serving the country because we want to build Bangladesh as a developed and prosperous country.”

Noting that they are entering the workplace in an unusual situation, she said you need to be aware that you have to follow the health rules at your respective areas and make others comply with the existing heath rules as well.

“The coronavirus has made our lives as well as the world standstill . . . We lost many people so you have to follow proper guidelines of health to prevent its spreading,” she observed.

Saying that it is unknown e what would be the situation if the second wave strikes here, the prime minister said, “Many countries have gone into lockdown again. But we are still in a tolerable state. But we should be very careful.”

About the upcoming COVID-19 vaccine, she reiterated her government’s position that they earlier booked the vaccine and Bangladesh would be able to bring it whenever it starts being used.

Sheikh Hasina said she has already given instructions to all levels of government and private sector to take necessary steps to deal with the second wave of coronavirus.

“We have to overcome this situation by accepting all the adversities in the days to come,” she added, urging everyone to maintain the standard quality of all development projects undertaken by her government amid the pandemic situation

Mentioning that the incumbent government has already proved that it can develop the country, Hasina said, the country has now become a digital Bangladesh. “Although we had an aim to take the growth rate to over eight percent, we have lagged behind due to coronavirus. “But the economic growth in many developed countries went negative while we have managed to achieve a 5.4 percent growth,” she added.

He cited his government’s incentives, cash assistance and efforts to reach food to people’s doorsteps during the pandemic and said, “We have made every effort to keep people’s lives moving in the prevailing disaster.”

The premier urged the young officers to read some books including the Agartala conspiracy case proceedings, ‘Unfinished Memories’ and ‘Amar Dekha Noya Chin’ to know the country and the founding Father of the Nation Bangabandhu Sheikh Mujibur Rahman’s thoughts and ideals.

“These will help you to know the country’s actual history, Bangabandhu’s thoughts, philosophy and world situation,” she said.

Stating that Bangladesh has gained recognition as a developing country through the efforts of her government, Sheikh Hasina said, “We have to sustain this achievement in days to come.”

The prime minister said the government has also set up information technology (IT) networks and extensive roads links, waterways, railways and airways across the country for this purpose.

She said, “No nation can ever progress without a goal. A nation needs a direction, a philosophy, a goal to progress. So, her government is implementing a 10-year perspective plan along with a five-year one and a 100-year ‘Delta Plan-2100’.”

The premier said her government’s goal is to make Bangladesh a developed and prosperous country by 2041.

“And you (officers) are the ones who are taking the training today but then you will go to a higher level and you will be the leader of 2041, you will implement it. So, build yourselves in that way,” she hoped.

Sheikh Hasina said, “Though the land is limited, we have achieved self-sufficiency in food by increasing production through research and we must continue this trend.”