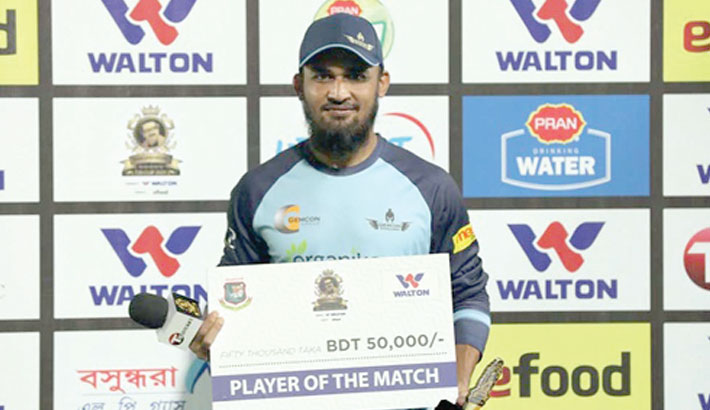 Ace all-rounder Shakib Al Hasan failed to make a noteworthy return in competitive cricket as he resumed his cricket career after a gap of 408 days.

Gemcon Khulna recruited him in the players’ draft of the tournament, paving his way to return to cricket, from which he was banned by International Cricket Council due to his failure to report the corrupt approaches of the bookies.

He was free to play cricket after his ban was lifted on October 28. But since no tournament was held in Bangladesh, he had to wait for almost a month before he could start playing.

Shakib however had completed a four-week training camp with his mentors Mohammad Salahuddin and Nazmul Abedeen Fahim at Bangladesh Krira Shikkha Protisthan (BKSP) in September. The training was conducted mostly behind closed doors.

He went through the training sessions as he was slated to play the second Test of Bangladesh’s tour to Sri Lanka. The series eventually got postponed and Shakib left the country for USA, cancelling his training sessions.

Shakib didn’t let people know what sort of training he did behind the closed door in BKSP but it was learnt that he took the help from BKSP athletics coach Abdullah Hel Kafi and young boxing coach Ariful Karim in a bid to retain his fitness.

Shakib did not take long to get into the groove as he picked Afif Hossain with his seventh ball though he can call himself lucky as the short pitched ball could have gone anywhere but landed at the palms of Jahirul Islam Omi.

However, he failed to get another wicket but bowled decently in his opening game after long gap.

But he could not have an impact with the willow during his stay in the middle making just 15 runs when Sumon Khan sent a short one and Shakib took him on with no power behind the pull shot  that went straight into the hand of Afif who was standing at  backward square leg.

Thanks to Ariful Haque, heroic Khulna snatched a four-wicket victory against Fortune Barishal from the jaws of defeat in their opening match of Bangabandhu T20 Cup at Sher-e-Bangla National Cricket Stadium on Tuesday.

Requiring a 22 runs for a victory in the last over, overhauling Barishal’s 152 runs for 9 wickets, Ariful unbelievably struck four sixes to sail the side home. Mehedi Hasan Miraz was at the receiving end as Ariful produced a master-class, driving the side to the victory with one ball to spare.

Ariful eventually was not out on 48 runs off 34 balls with 2 fours and 4 sixes. With Khulna reeling to a precarious 36 runs for 4 wickets, Ariful came to bat and stayed until he confirmed the victory for the side.

“I am happy that I stayed till the end,” said Ariful adding that their tough win does not imply that they are a weak team.

“Actually, we returned to cricket after a long gap and it can happen,” he said.

“We might be strong team on paper but we need to perform to win the game and sometimes it will be a close match while at times we will win easily,” he concluded.