BTRC inks deal with Syesis IT for mobile handset registration 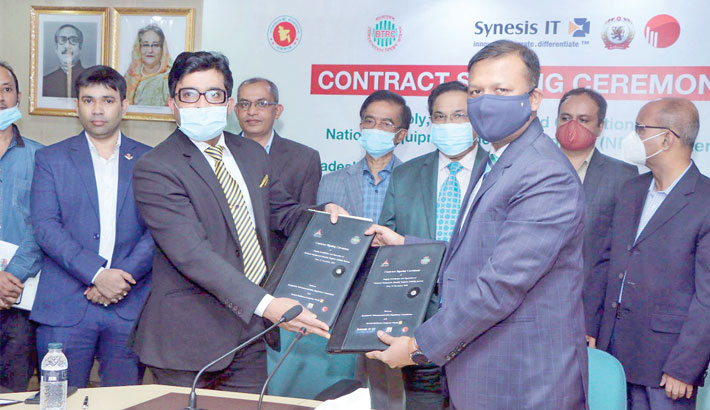 Bangladesh Telecommunication Regulatory Commission (BTRC) has signed an agreement with Synesis IT for the registration of valid mobile handsets.

The agreement was signed at the BTRC office at Ramna in the capital on Wednesday, said a press release.

Radisson Digital Technologies Limited and Computer World Bangladesh will also work on the project in a joint venture with Synesis IT.

BTRC has nominated Synesis IT through a competitive tender to launch and operate a system called National Equipment Identity Registrar (NEIR).

Regarding the signing of the contract, Md Jahurul Haque said, “Synesis IT has got this project as a qualified company and I hope they will complete the project within the stipulated time."

"This project will generate huge amount of revenue for the government. All in all I hope it will be a fruitful deal," he added.

"The way we have implemented another important initiative of BTRC, the biometric based SIM registration project, very efficiently using domestic technology, will be the same here,” he said.

"We will be able to implement the NEIR project before the scheduled 120 working days," Shohorab said while expressing optimistic desire.

In 2012 BTRC took the first initiative to shut down the illegal mobile phones as well as register the legal phones.

Synesis IT has to make it active within 120 working days after the agreement and the company has taken full preparation by abiding all the instructions given by BTRC.

It will take 16 weeks to import hardwires and 12 weeks to set up the data center. The preparation will wrap up within the first quarter of next year, Synesis IT added.