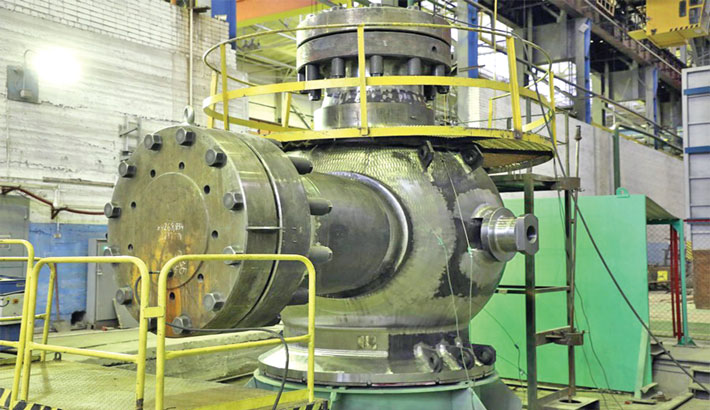 Petrozavodsk Branch of JSC, a part of machine-building division of Rosatom State Corporation has accomplished hydraulic testing of housings of the reactor coolant pump set (RCPS) being part of a set of items intended for the first power unit of Rooppur Nuclear Power Plant.

Hydraulic testing is one of the most important types of inspection to be carried out during manufacture of the pump housings. It is an instrumental in confirmation of strength and tightness of items, said a release.

According to the testing schedule, the RCPS housing is to be filled with specially prepared water, which is then heated with steam. The minimum temperature of the housing wall heating is 52oC. The pressure is to be built up to 24.5 MPa (over 240 atmospheres) and held within 10 minutes.

After the pressure reduction, the visual inspection is to be performed. After that, the RCPS housing is to be subjected to the repeated liquid penetrant testing, following which the item is to be prepared for shipment to the Customer.

The RCPS housings are the items belonging to the first safety class. At a nuclear power plant, the reactor coolant pump set provides coolant circulation from the reactor to the steam generators and operates under a coolant pressure of about 160 atmospheres and at a temperature of 300 degrees. The extent of supply for one power unit consists of four spherical RCPS housings.

Rooppur plant will consist of two power units equipped with two VVER reactors, the life cycle of which amounts to 60 years with an option to extend the service life for 20 years.