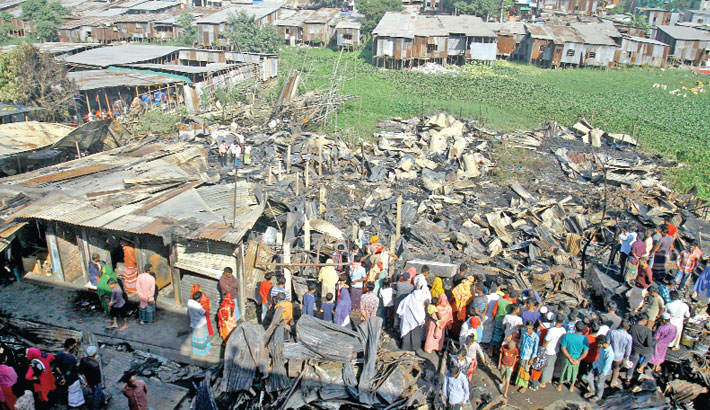 Dwellers look at the charred remains of shanties at a slum in the capital’s Mirpur area after a devastating fire breaks out on early Wednesday. — Reaz Ahmed Sumon

At least 55 shanties and shops were gutted in a fire that broke out at a slum in the capital’s Mirpur early Wednesday.

Rasel Sikder, duty officer of Fire Service and Civil Defence Headquarters control room, said the fire started at around 2:00am at the slum in Bauniabadh area near Kalshi.

After receiving information, 12 fire-fighting units rushed to the spot and brought the fire under control at around 3:10am, he said.

The fire was extinguished after four and a half hours of frantic efforts at around 6:28am, said Rasel.

He said 43 shanties and 12 shops were burnt to ashes. No casualty was reported while the cause of the fire could not be known immediately.

Another devastating fire raged through the same Bauniabadh slum nearby Kalshi bus stop in the wee hours of December 27 in 2019, burning down at least 100 shanties and 15 shops.

On Monday night, a fire broke out at Sat Tola slum in Mohakhali, burning down around 100 shanties and shops while 60 shanties were gutted in a fire at Jahuri Mahalla slum in Mohammadpur on Tuesday.