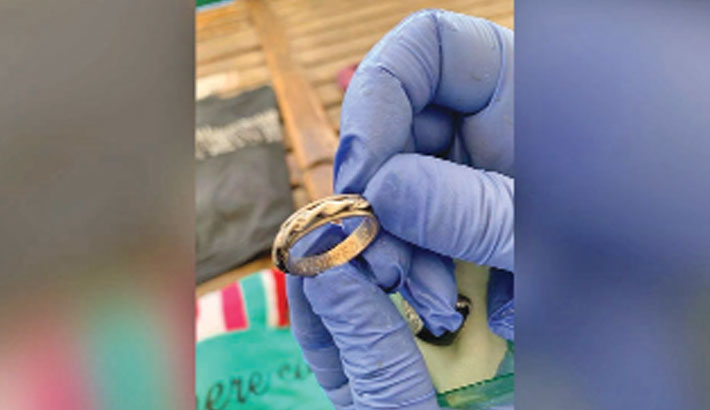 When a migrant rescue team found two wedding rings in a backpack floating in the Mediterranean, they feared the owners were dead, reports BBC.

Covered in tiny sea creatures, the bag was on a half-sunken boat that had capsized weeks before, killing five people.

But they shared images of the belongings with aid workers in Italy, who started asking around. To their surprise, they found the owners, a young couple from Algeria. Now the pair, whose names Ahmed and Doudou are inscribed on the rings, are set to be reunited with the possessions they thought they had lost forever.

“When I shared the photo I never thought that I would find the person the bag belonged to,” Ahmad Al Rousan, a cultural mediator for medical charity MSF in Italy, told the BBC.

“At the same time, I was thinking it was probably someone who had died in the Mediterranean.”

Al Rousan was part of the team that provided psychological support to Ahmed and Doudou and 13 others after their boat capsized off the island of Lampedusa on 21 October.

The couple, thought to be in their early 20s, had been living in Libya but felt forced to make the perilous journey to Europe as the country became increasingly dangerous.

Forty-eight hours into the crossing their boat went down. Five people died, including an 18-month-old girl.

Ahmed and Doudou, whose full identities are not being released, were rescued by fishermen. They were then moved to a reception centre in Sicily, where they were shown photos taken by the NGO Open Arms Italy of the bag and other belongings.

“I spoke with Ahmed directly and he started to explain about the rings and why they were in the bag,” said Mr Al Rousan. The rings were broken and the couple had hoped to get them repaired in Europe, he said.

“Ahmed was really emotional. He was happy to find the rings as they are something very personal. But he could not get from his mind the whole incident and the five people who had died.”

Al Rousan says that when Open Arms Italy approached him about showing people the photo, he told them he thought it would be “impossible” to find the owners.

He is often tasked with helping family members find the bodies of loved ones, so tracing the items to Ahmed and his wife instead was “a very nice feeling”.

But the couple are said to still be in shock from the incident. On the same trip, a nine-year-old girl lost her mother and sister, according to MSF.

The backpack containing their rings is still onboard the Open Arms ship, off the coast of Sicily. The team reportedly plan to give them back once they leave Covid quarantine.

“We washed everything in the backpack onboard, including clothes and T-shirts,” Riccardo Gatti, the president of the NGO Open Arms in Italy, told the Guardian.

“We can’t wait to deliver it to Ahmed and Doudou. It was a strong emotion for us too.

“It’s not just about objects. These bags that we often find are all these people have. Like these rings, a symbol of a love that fortunately, at least this time, the Mediterranean has spared.”