Marine Drive, a combination of mountains and sea 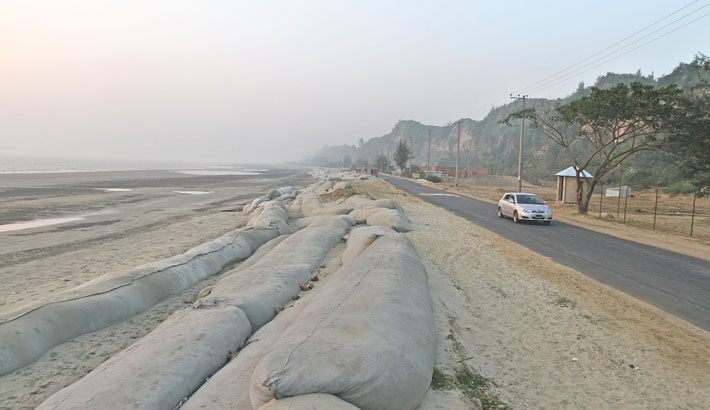 A car is running on the marine drive from Kalatali to Teknaf in Cox’s Bazar district. The 80-kilometre stretch of the road has become one of the popular tourist destinations in the country. The photo was taken on Wednesday. —sun photo

The world’s longest marine drive from Kalatali to Teknaf in Cox’s Bazar of Bangladesh along the Bay of Bengal has already drawn tourists’ attention to its natural beauty.

The 80km-long marine drive, which stands between the sea and the mountains, is a thrilling place for thousands of tourists from home and abroad.

As there are police check posts in the dreamy drive, it is safer for tourists who try to escape from the torment of traffic jams, black smoke dust and dirty city life.

The smooth winding marine drive is located in the middle between the green hills on one side and the blue sea on the other side.

Along the way, the roaring waves in the sea refresh the minds of tourists.

The marine drive has already been making contribution to a tourist-friendly ambiance along with economic growth in the tourist town of Cox’s Bazar.

Every year thousands of tourists flock to the 125km sandy beach in Cox's Bazar to see the sea waves.

Jasim Uddin, a jeep driver of Cox’s Bazar, told the Daily Sun, “Every day a large number of tourists come to this marine drive and enjoy the incredible beauty.”

“The thrilling journey on the whole road from Kalatali in Cox’s Bazar to Sabrang Economic Zone in Teknaf along the Bay attracts nature lovers. For a roundtrip, it takes about 4 hours.”

Alamgir Hossain, a tourist from Dhaka, told the Daily Sun, “Going through the marine drive experiences all the beauty of the vast sea and the view of the fishermen there is a different experience.”

“You can see the view of the waterfall flowing down the hill there. On the way, you will see the high green hills looking at you. On one side of the Reju Khan and the confluence of the sea, rows and rows of betel trees, on the other side Jhaubithi,” he added.

He also said the look of the evening is different. Visitors have a golden opportunity to enjoy the beauty of the full moon on a full moon sitting in a safe place on Marine Drive by the sea.

He said a proposal has been submitted to widen the marine drive from Kalatali to Inani at a cost of Tk 1,000 crore.

Another proposal for building a 1.70km seawall to protect the marine drive road from the sea was also submitted, he added.

If these two projects can be implemented, the marine drive will be more attractive and beautiful, the engineer hopes.

According to the RHD sources, the cycleway-walkway from Kalatali to Laboni Point will be connected to the Marine Drive.  There will be walkways on both sides of the Marine Drive road, flexible pavements, sheds, car parking and changing rooms for female tourists along the road for the convenience of tourists.

According to tourism experts, the marine drive opened new avenues for employment, including modern tourism, industrialization, investment and use of marine resources.

The government has been taken an initiative to build a 170km marine drive from Teknaf in Cox’s Bazar to Mirsarai in Chattogram.

It will be connected to the existing Marine Drive from Cox's Bazar to Teknaf. Marine highways will bring a prosperous and developed unique Bangladesh.

The government has allocated Tk 12.82 crore for the feasibility study on the project. If implemented, it would be another longest marine drive road in the world.

It will play a huge role in turning the economy surrounding this marine drive. It will be possible to earn thousands of crores of taka a year from the tourism industry alone. This will be associated with the trade of raw materials.

They opine that the amount of fishery extracted from the sea will be able to reach any part of the country in the shortest possible time.

Allegations are rife that snatching incidents take place in the marine drive.

Sources said it took 24 years to construct the 80kilometre-long marine drive road. The marine drive road project which launched in 1993 has been implemented by the Construction Engineering Battalion of the Bangladesh Army at a cost of Tk 1,040 crore.