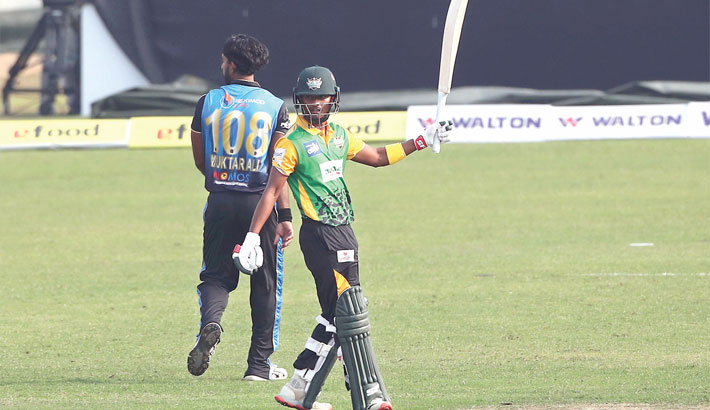 Minister Rajshahi batsman Mahedi Hasan celebrates after scoring a half-century (50) against Beximco Dhaka during their Bangabandhu T20 Cup at the Sher-e-Bangla National Cricket Stadium in the capital on Tuesday. — reaz ahmed sumon

The young off-spinner kept his cool to guide his team to a two-run win as he restricted Muktar Ali from scoring required the 9 runs in the last over as a result Dhaka ended up putting 167 runs for 5 wickets in 20 overs chasing 170 runs to win.

Mushfiqur Rahim and Akbar Ali (34) put on 69 runs on the board from 53 balls in their fourth wicket stand and Dhaka looked well poised to earn a comfortable win but Farhad Reza broke the partnership to bring Rajshahi back into the game.

The onus was on Mushfiqur to guide the team but the skipper failed to fulfill the responsibility as he ended up giving a catch to wicket-keeper Nurul Hasan trying to scoop Ebadat Hossain.

Muktar Ali’s unbeaten 16-ball 27 runs kept Dhaka’s hope alive but Mehedi had other plans and came up with a match winning last over.

“I think Akbar Ali’s wicket was important as at that point it was difficult for anyone to come and score freely,” said Mushfiqur Rahim.

“I think we did not bowl well while Mehedi and Sohan’s partnership was vital,” he said. 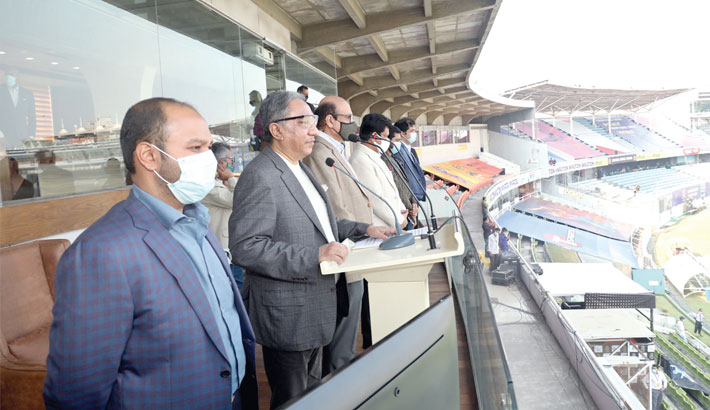 Bangladesh Cricket Board President Nazmul Hasan Papon, MP and Bashundhara Group Vice-Chairman Safwan Sobhan Tasvir are seen along with other BCB officials during the inaugural ceremony of the Bangabandhu T20 Cup at the Sher-e-Bangla National Cricket Stadium in the capital on Tuesday.     — SUN PHOTO

Winning captain Nazmul Hasan said that he was happy to start the tournament on a perfect note and praised Mehedi for his all-round effort.

“Mehedy was outstanding both with the bat and ball. He was really impressive,” said Nazmul.

Mehedi Hasan smashed 50 runs off 32 balls with 3 fours and 4 sixes to help his team put 169 runs for 9 wickets against Beximco Dhaka at Sher-e-Bangla National Cricket Stadium on Tuesday.

But in the sixth wicket stand, Nurul Hasan and Mehedi added 89 runs. Nurul made 39 runs off 20 balls with 2 fours and 3 sixes. And, Mehedi smashed the first fifty of the event in style. Eventually, Rajshahi posted 169 for 9 wickets in 20 overs.