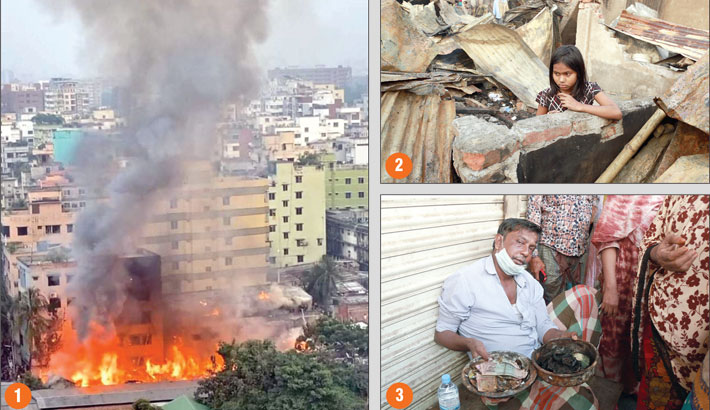 The Fire of Despair - (1) Thick smoke billows out of Bihari Patti on Babar Road in the capital’s Mohammadpur area as fires smouldered on the cramped area on Tuesday. (2) Standing amongst the burnt-out ruins, a teenage girl looks helplessly after losing everything they had in a devastating fire at Sat Tala slum in Mohakhali on Monday night. (3) A visibly distressed man shows some burnt-out banknotes of different denominations after the fire at Sat Tala slum. —Reyad Hossain

Devastating fires swept through Sattala Slum in Mohakhali and Bihari Patti in Mohammadpur in the capital on Tuesday, razing around 100 shanties to the ground.

Rakibul Islam, 15, who received burns to 25 percent of his body during the fire incident, is now undergoing treatment at Sheikh Hasina National Institute of Burn and Plastic Surgery. He is a resident of Sattala Slum and son of Yunus Ali of Hossainpur in Kishoreganj.

Mahmudul Hasan, station officer of Tejgaon Fire Service and Civil Defence, said the fire started at Sattala Slum around 12:30 am.

On receiving information, 12 units of firefighters rushed to the spot and put out the flames after struggling for more than an hour. The cause of fire could not be ascertained, but an investigation is underway, he added.

Bithi Rani, who got married two months back, said, “The fire burnt everything they had. There is nothing left. We don’t know what we’ll eat today (Tuesday) as we haven’t got a single penny.”

Tania Akhter, a student of Class V, said that she studied until 10:00 pm. While in her sleep she heard people crying out for help, she got up, and moved to safe place, but her books and other valuables burned down completely.

The same is the case with other residents of the slum. They have been spotted staying under the open sky with nothing to eat.

A total of 10 firefighting units whisked off to the spot and brought the blaze under control at about 5:00 pm, said officer of Fire Service control room Russell Shikder.

He said that the fire gutted about 35 tin shacks, but no casualty was reported.