Metro rail work gets into gear 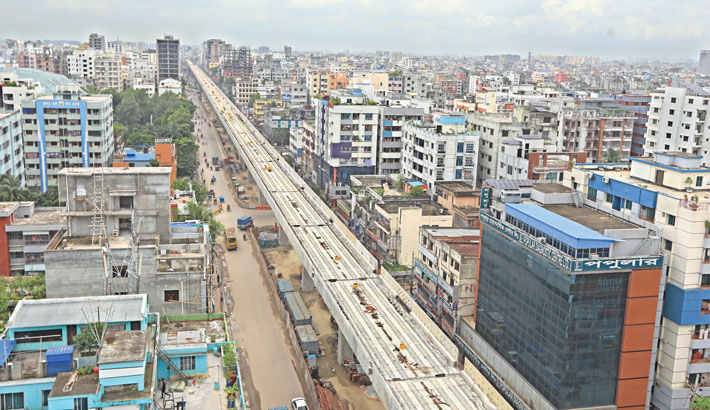 The ongoing metro rail projects in the capital are gradually gaining momentum, thereby returning to their pre-Covid-19 state in line with the return of foreigners that left the country during the virus outbreak.

Even though some important mega projects were running in a limited scale during the lockdown period, the work of metro rail projects was put nearly to a halt as Japanese experts, contractors and workers left for their country.

Recently, the work has started again as the Japanese project people started joining their project work. Apart from Mass Rapid Transit (MRT-6) stretching from Uttara to Motijheel, work of two smaller links is also going on.

“The work of time-bound MRT Line-6 is going on in full swing, while work for detailed designing of MRT Line-1 from Kamalapur to Airport and from Notun Bazar to Pitolganj depot is also under way,” commented an official of Dhaka Mass Transit Company Ltd (DMTCL).

The appointment of consulting firm for MRT Line-5 southern route is at the final stage, they added.

Besides, the appointed consultant for MRT Line-2, to be built on G2G PPP basis, started Full Scale Study (FSS) from 15 September this year, and construction of another route MRT Line-4 from Kamlapur to Narayanganj is under process.

In the current fiscal’s ADP, the government allocated a total of Tk72.44 billion, including Tk55.43 billion for MRT-6.

The total budget of these projects is Tk1.17 trillion, including Tk219.85 billion for mass rapid transit (MRT) line-6.

The fast-track report of Economic Relations Division’s (ERD) suggests that a Tk5.54 billion has so far been spent on the metro rail projectsin the first quarter of this current fiscal from the current ADP allocation.

Cumulative expenditure from the beginning stood at Tk124.33 billion.

ERD progress report suggests that the MRT Line-6 saw an overall progress of 53.37 percent in the first quarter of FY21.

Public works of the first phase of the route from Uttara to Agargaon advanced 76.87 percent in the first four months of FY21 and that of Agargaon-Motijheel portion 45.51 percent, according DMTCL data.

Social study for extension of 1.16km from Motijheel to Kamalapur in line with the Prime Minister’s directive is at the final stage, according to DMTCL officials.

The government allocated Tk5.91 billion for the project, of which Tk1.47 billion has been spent in the first quarter, according to ERD’s report. Cumulative expenditure from the beginning stood at Tk3.47 billion to post 0.66 percent financial progress so far.

20km MRT Line-5 (northern route) is being implemented from Hemayetpur to Vatara via Mirpur at a cost of Tk412.39 billion from September 2019 to December 2028 period.

A Tk8 billion was allocated this year against this project and Tk532.5 million was spent from ADP allocation in the first quarter and its cumulative cost has been Tk725.7 million. So far, its overall progress was 0.18 percent.

Besides these projects, feasibility studies are being done for MRT Line-5 (southern route) which progressed 0.08 percent so far.