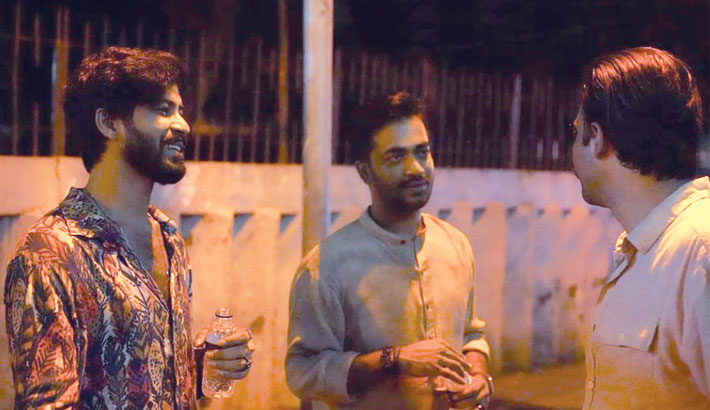 ‘Mainkar Chipaya’, the first Bangladeshi original on the OTT platform, is getting huge audience response. Besides audience, this dark comedy-style thriller film is also now a hot cake in the entertainment industry of Banagladesh.

‘Mainkar Chipay’ was released on Zee5 Global on November 9. Since then, audience of all classes of the country is talking about the web film in social media.

Netizens post numerous posts in social media regarding the story, actions, directions and cast of the web film that revolves around on a specific night where three men were caught in a situation that only seems to get worse.

Abrar Athar, an award-winning director of the country has directed the web film where Afran Nisho, Sariful Razz and Shamol Mawla star as various roles of this film and it was a brilliant debut of local content stale in a global platform like Zee5.

The 50-minute packed story of one night starts with Sameer (Shariful Razz) who drives down in his Prado car to meet his regular drug dealer Shafiq (played by Shamol Mawla) in a lonesome area of the city, but he doesn’t know what the night has laid down for him. Then a complicated plot unknots with the drug dealers and the drug addict when a stranger (Afran Nisho) entered the plot with an unknown agenda which leaves audiences guessing right until the close as to where the story will end up. The film progresses penetratingly and ends a perfect twist to accomplish a crazy night of Mainkar Chipay.

The story of Mainkar Chipay also initiates a clear anti-drug message for the youth to avoid getting into a mazed situation of Mainkar Chipay. The story of this web film also reveals that, in this sphere puzzled game of drugs, everyone is actually looser, no one is a winner.

Mainkar Chipay has a simple anti-drug storyline with plucky dialogues and punches that are extremely relatable and reveal an intensely dark sense of humour.

In web film Mainkar Chipay, pop-culture, Bangla lilts, nocturnal drama have been added the eccentricity of every character. The story is neither preachy nor too dark in taste. From teen-patti to Celine Dion’s Titanic song and some cool Hrithik Roshan dance moves, the film packs it all in less than an hour.

In the end, the film was an impeccable thriller, a reflection of the excellent performances of some of the best actors. Needless to say, the entertainment industry will move forward if more such works are made on this platform.