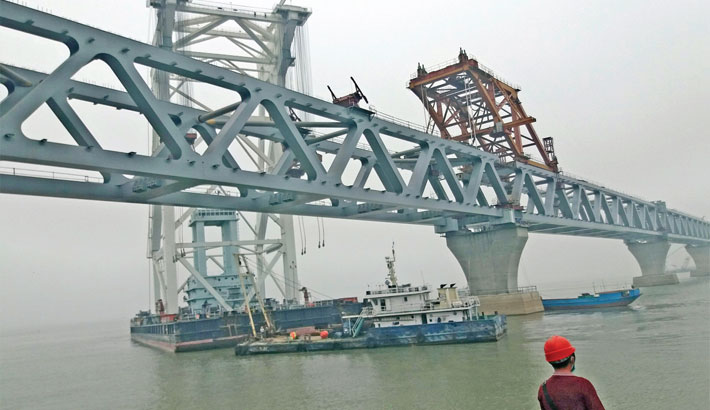 The 38th span of the Padma multipurpose bridge was installed at the Mawa end of the mega structure on Saturday. With the installation of the 150-metre long span, 5.7 kilometres of the 6.15-km bridge is now visible. —sun Photo

The 38th span of the Padma Bridge was installed on Saturday making 5.7-kilometer stretch of the megastructure visible.

Project engineers infor-med that they successfully mounted the span marked 1-A on piers no 1 and 2 at Mawa point around 2:30pm.

“Around 9:15am floating crane Tian-E carried the span from Kumarvogh construction yard at Mawa. It reached the site shortly and was installed successfully at 2:35pm as there was no difficulty and weather was in favour,” said Dewan Md. Abdul Kader, Executive Engineer (Bridge), or the mega scheme said.

The new span was installed nine days after placing of 37th span on piers no 9 and 10 at Mawa point on November 12.

The span was actually supposed to be installed on November 16 but it could not be possible then as one the piers is on the riverbank.

Engineers had to dredge between the two spans to facilitate the floating crane reach the spot. Moreover, some technical issues also consumed some days, project officials informed.

Vehicles and trains will enter the bridge through this span. Despite being a beginning span, its work face delay because of complex character as well as depth of soil. Engineers had to start work from Jajira point to keep the work running, according to project officials.

Now, only three spans are left to make the full bridge structure visible.

December 10 is the deadline to complete the whole span installation work for the 6.15km under-construction Padma multi-purpose bridge.

On November 27 or 28, the 39th span marked ‘2-D’ is scheduled to be installed and the rest two in December. All the spans are now ready at the construction yard.

The double-deck 6:15km bridge will have a total of 41 spans. Project officials informed that installation of all the spans will be possible by December 10.

November 23 is the scheduled date of installing 39th span.

The penultimate span will be mounted on December 01 and last one on December 10, according to officials. Making the bridge ready for vehicular movement and rail connectivity will require 2,917 roadway slabs and 2,959 railway slabs.

Of them, 1,165 roadway slabs and 1,646 railway slabs have been installed up to October, Bridges Division figures suggest.

Construction of the Padma Bridge began in December 2014. With the installation of 37th and 38th spans in September 2016, the structure became visible for the first time.

The construction of the main bridge is being carried out by China Major Bridge Engineering Company (MBEC), a Chinese contractor, while Sino Hydro Corporation, another Chinese company, is working on river management.