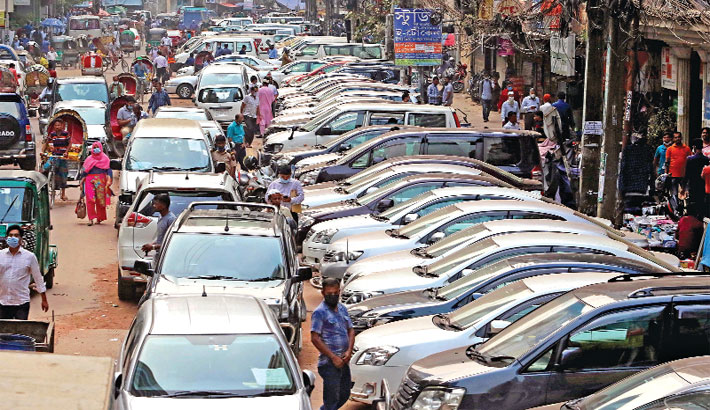 Cars have been illegally parked on Dilkusha Road in the capital’s Motijheel area during office hours, hampering traffic on the busy road. – Md nasir uddin

Nearly 300 new vehicles hit the streets in the capital every day, but their parking facilities are not increasing, which causes great concern for traffic management.

Official data shows that a total of 10,34,175 vehicles have got registration with Bangladesh Road Transport Authority (BRTA) from 2011 to October 2020. On average, 292 vehicles got registered in a day.

Urban transport experts say the number of new vehicles is increasing every day, but their parking facilities are not created for smooth traffic management.

They say that a vehicle remains parked for 85-90 percent of its lifespan. But the authorities concerned have taken no major combined efforts, including building of parking infrastructure, regulation of the existing system and ensuring of parking spaces in high-rise buildings, for the rising number of vehicles.

They, however, have blamed the lack of coordinated efforts of different agencies like the city corporations, the RAJUK, Dhaka Transport Coordination Authority (DTCA) and Dhaka Metropolitan Police (DMP).

Besides, the authorities concerned could not ensure the proper management of existing parking and enforcement of traffic law.

Illegal parking becomes one of key problems, which causes 30 percent of gridlocks in the capital and it leads to 100 million financial losses every year, said Director of the Accident Research Institute (ARI) of Bangladesh University of Engineering & Technology (BUET) Professor Md Hadiuzzaman.

Prof Hadiuzzaman also said a megacity requires more than 30 percent of roads of its total development for proper mobility of traffic, but Dhaka has only eight percent. For that we have to turn to space efficient and mechanical parking system likes “paternoster parking” because it can accommodate five times more vehicles than a traditional multistoried parking.”

He also said that in Dhaka vehicles are parked on the roads in perpendicular pattern which consumes 60 percent width of a road but we have to turn to parallel parking along the kerb-line which helps reduce gridlocks.

According to the Bangladesh National Building Code (BNBC), the buildings above six storeys must have adequate car parking facilities but a study of RAJUK conducted in 2014 found that 40 percent of high-rise commercial and residential buildings do not have parking facilities.

In the study, it was revealed that 90 percent buildings in Motijheel, a busy commercial hub of the capital, do not have the required parking facilities.

During a recent visit to Motijheel and Dilkusha areas, it is witnessed that vehicles are parked haphazardly on the roads, lanes and by-lanes and in front of different office buildings violating rules, which causes immense sufferings of people as well as movement of vehicles. This is an everyday scenario there.

A noted urban planner, who wanted not to be named, said that situation has not improved much in 2020 rather got worse due to lack of monitoring by the RAJUK.

The RAJUK conducts mobile courts over the year to penalise those who are not following the proper codes but it hasn’t yielded any positive result so far.

Two city corporations have leased out one-third of their total roads for on-street parking which is the main reason for traffic gridlock in the capital, urban planners said.

Dhaka North City Corporation (DNCC) has only two off-street parking yards, one at Gulshan-2 pakka market with having capacity of parking of only 76 vehicles and another in Gulshan-1 pakkha market with a capacity of 120 vehicles.

The DNCC has marked 725 on-streets parking in different locations under its jurisdiction while it has market 1980 spots for parking in 23 new roads which was approved by Dhaka Transport Coordination Authority.

Besides this, the DNCC is conducting a feasibility study to find suitable spots for multistoried parking in Gulshan, Banani and Karwanbazar areas.

Motijheel City Centre can accommodate 315 vehicles while Sun Moon Tower is not being used for a dispute.

A total of 26 spots have been selected by DTCA located in the area, including at important Motijheel and Dilkusha areas.

It has taken an initiative to construct 19 parking slots in January 2018 which is yet to see the light.

Besides, the DSCC will construct underground parking at Osmani Uddyan.

Dhaka Transport Coordination Authority (DTCA ) is framing a parking policy for the capital city which is awaiting an approval from the government.

The DTCA has approved 64 places for street parking under the DSCC and the DNCC areas as per the demand of the DMP.

Talking to the Daily Sun, DTCA Assistant Traffic Engineer Safayat Farooq Chowdhury said the DMP has sought permission of parking at 68 spots, but the DTCA after field visit so far approved 64 spots for on-street parking under the two city corporations.

Regarding the parking policy, he said that DTCA sent the draft to the Ministry of Roads and Bridges Division in February. The Ministry has also sought opinion from different departments concerned.

In the draft policy, it has suggested ensuring proper enforcement of the Bangladesh National Buildings Code and parking in every high-rise building.

Besides this, it has also suggested construction of multistoried, underground and plain parking grounds at convenient spots and private sectors are encouraged to develop bus terminals and bus depots.