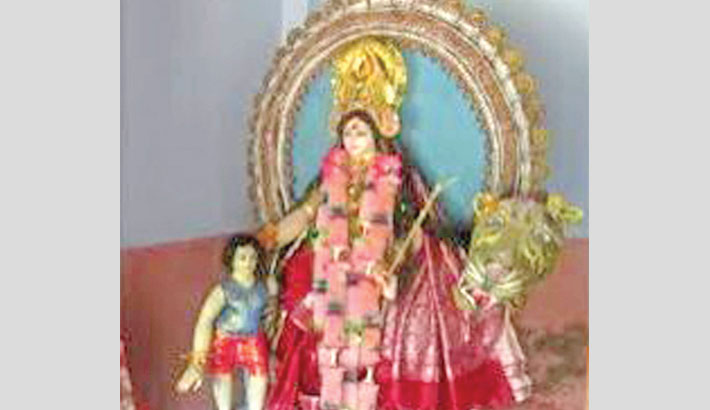 Here is an interesting story of a Hindu Goddess who is a symbol of communal harmony and religious unity. She is Bondurga (Durga of Forest) alias Bonbibi and she is worshipped by a large number of forest dwellers irrespective of caste and creed, particularly in the Sundarbans of Bangladesh and Paschimbanga as well as other forests. In the present day context, this story is very relevant and can be read by all.

Worship of Bondurga in the form of Maa Vandani has been observed in the villages inhabited by Rajbangshis of the northern region of Paschimbanga. Not only Rajbangshis, but people of all religions of the neighbourhood participate in the worship of Mother Vandani, who is two-armed and her carrier is a tiger.

As origin of this festival there is a very attractive folk tale that after immersion, Uma (Goddess Durga), as a village bride, was returning from Kailash, her paternal home, to her father-in-law’s house through forests of this locality. She, in the meantime, lost her way in the darkness of night and started crying. Hearing the sound of weeping some people of Rajbangshi sect came running and took her to their village. The goddess stayed one night there and went away on the next (11th) day. Being pleased with hospitality of the villagers, before leaving she disclosed her actual identity and blessed that their fields would always remain full of grain. That is the beginning of worship of Goddess Vandani. As the goddess passed a night there, this puja is held at night. It is believed that age of this worship in Bhandari (a village under Jalpaiguri district, Pschimbanga) is 500 years. The village takes the shape of human sea on this occasion. Devotees from different places and even from Bangladesh, Nepal and Bhutan flock to this festival.

Reference to Bondurga is also found in Bankimchandra Chaterjee’s novel Devi Chowdhurani. Literature lovers know that life of Devi Chowdhurani is based on history. Bhabani Pathak, shadow companion of Devi Chowdhurani, was from Delhi Bhita where history speaks. Cherishing the memory of Devi Chowdhurani, worship of Bondurga is observed every year on the full moon day in Poush. There is a village named Sannyasighat in jungle of Baikunthapur in Rajganj Block under Jalpaiguri district. History informs that Bhabani Pathak was an inhabitant of Uttar Pradesh. At that time local people of Jalpaiguri termed Uttar Pradehis as people of Delhi Bhita (homestead). The locality adjacent to Baikunthapur where Bhabani Pathak lived was Chander Haat and dacoits were called in code names. Devi Chowdhurani used to visit the dwelling place of Bhabani Pthak which was surrounded by eight types of trees. It is thought that ahead of fighting for liberation against the British rulers, Devi Chowdhurani, along with Bhabani Pathak, attended a meeting with patriot monks in this village. Since then the village is called Sannyasighat. People of Rajbangshi sect arrange this worship since long. Initially it was known as Thunthuni Puja.  Thirty-seven years ago, people of this area renamed it as Bondurgapuja. Ignoring the apprehension of invasion of wild elephants, a majpr fair is held there. Passing a winter night in deep forest creates a feeling that is beyond expression.

Another festival of this type is Worship of Bonbibi, also known as Bondurga, Bonchandi and Bondevi. In Hindu paintings she is found wearing a yellow gown and a garland of wild flowers, with a stick in one hand and a trident in the other. The Muslims respect her as Banbibi. In both Hindu and Muslim paintings there is a boy on her lap. Her vehicle is a cock. Irrespective of religious belief forest dwellers of the Sundarbans devote themselves to Bonbibi. Different branches of folk literature have been written on forest deities like Shah Jungli, Gazi, Kalu, Manik Peer etc. Bonbibi is the most famous among them. According to popular belief she takes the shape of a cock or tiger. She has no enmity with anyone. She loves human beings and every creature of forest. She is believed to be their protector from tigers and Dakshina Roy. Prior to going to deep forest for fishing, collecting honey, wax or wood they worship this goddess.

Main worship of Bonbibi is held during mid-January every year. More than 2,000 permanent or temporary pandals are decorated in areas close to the Sundarbans. Three hundred pandals are located on west bank of the Pashur River. Apart from Bonbibi, statues of Shah Jungli (brother of Bonbibi), Gazi, Baby Dukho, her (Bonbibi) two uncles Dane and Mane are placed in these pandals. On the occasion of this worship folk fairs are held.

Worship of Kalu Roy is held for protection from crocodiles. Similar to Dakshina Roy, he is also a human deity but his attire is congruent with mythological gods having shield in hand, weapons on belt, bow and arrows on back. These deities are present in temples of fishermen localities of Pankhali at Munshignj in Satkhira district.

Reference to Dakshina Roy, Dane and Mane is found in the History of Jessore (now Jashore)-Khulna by Satish Chandra Mitra. Bonbibi is thought to be the daughter of Bebahim. Her mother Gulal Bibi was abandoned in the Sundarbans at the provocation of her step mother. Bonbibi and Shah Jungli were born there. Dakshina Roy was the ruler of a small area under Jessore district. Several battles occurred between Dakshina Roy and Bonbibi. Being defeated he compromised with Bonbibi. Afterwards forest dwellers, irrespective of religion, placed them at the seat of their gods and goddesses. Through these deities they gain courage to overcome fear of ferocious animals. This courage acts as their weapon to survive under severe adverse circumstances.