Role of Philosophy during Pandemic 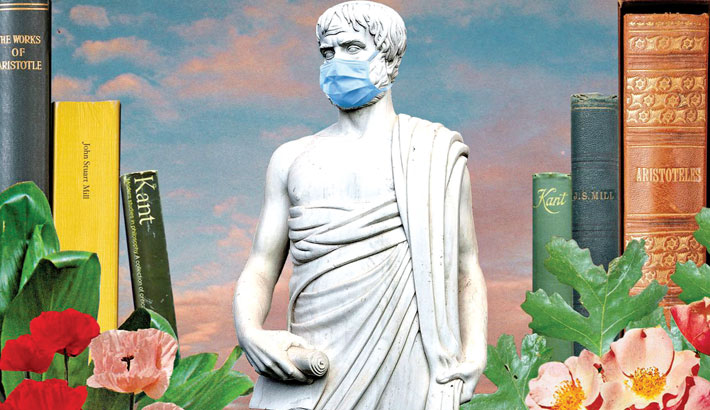 It sounds something bizarre when someone approaches to address present pandemic with philosophical knowledge. But in reality, there is nothing absurd to mull over such possibility as human being always tends to solve all crisis with the application of critical knowledge and humanistic approach. Philosophy in all senses takes the cognitive responsibility to meet the problem related to human life and the world we live in. That is why UNESCO, the largest international organisation and affiliated body of the United Nations makes no mistake to declare a day for philosophy every year. And, accordingly, every third Thursday of November has been fixed to celebrate the day with a new theme and objective.

Now the question is what actually philosophy does in the time of crisis? Many social and political thinkers in the world must agree with the proposition that coronavirus pandemic has thrown up political, social, ethical and healthcare crisis. And, philosophical problems are fundamental as its nature. To mention, more than 5.5 crore people are badly affected by this time and official death have been recorded for 1.33 million people across the world so far. Economy, education and social integrity have been shattered to a large extent and, of course, human understanding and climate of critical innovation have been smashed completely. This loss is uncountable.

Philosophy, in spite of its theoretical nature, can best be understood as a systematic and successful tool of solving human problem no matter what the nature of problem is, theoretical or practical. Pandemic crisis is such a problem which has its tremendous pernicious actions on human life and property.  Since philosophy is entirely involved with human critical action, so nothing can be excluded from its scope; rather philosophical knowledge can help human activities to address all sorts of problem.  How can this be possible? Philosophy can best be understood as the talk after talk i.e. meta-talk. To justify the claim made by everyone particularly people involved in any solution, philosophy do the best work by giving suggestions among the problem beneath the crisis. That is why, the role of philosophy is overarching.

First of all, this pandemic problem is entirely medical but its effect on human life is supposed to touch all corners of social and private life. What actually we need is to have patience and courage to tackle the crisis. Hispano Stoic philosopher Seneca once says, “Stop worrying about things which are beyond the power of our will,” So, what do we need then? Another question is utterly relevant: how does philosophy work? If Seneca’s aphorism is taken as granted what then people do to change everything? It seems to be paradoxical that philosophy is often defined to change the idea what common sense permits. I am sure we need to explain these two seemingly opposed questions related to the crisis.

The solution to the pandemic first of all depends on medical treatment and future tactic to thwart its further outbreak. So we need vaccination and its ethical distribution. Moral action can ensure its proper distribution because most of the countries which are likely to invent the vaccine are rich. So the difference between richer and poor people would make a considerable gap between them. There has always been an ethical condition among the countries. When the proper medical treatment would definitely solve the crisis, real problem will arise then. And, of course, people wouldn’t see any unethical and improper approaches to the poor nation.

The pandemic teaches us human limitation and their social fragility in terms of an integrated whole. Integrated whole means the way on which this big earth runs. Man is a part of this nature if not all because the earth contains numerous bodies animate or inanimate where human being is really a trivial body although very important. Their supremacy over nature and fellow beings are drastically overridden. An invisible deadly object would smash their invaluable lives is simply unthinkable as they boast of their knowledge and sagacity. The very realisation about the nature and human life can obviously be changed. Most importantly, people should learn the best quip of Darwin “survival of the fittest”. If you want to survive on earth find your way to kill your enemies, if you fail to do so embrace the death.

The best think we learn from the crisis is individuality and impersonality. People are absolutely individual and isolated from others particularly their body and mechanism but this individualism for social cause can’t restrain themselves. They need to see others and think about other people. Global order, human relationship, foreign dealings, climate thought, regional and global treaty everything has been changed to a large extent.  To mention, all rich nations are highly affected than the poor; for example, USA, UK, France, Brazil, Italy and India.  Their technological vulnerability and medical management are proved to be inadequate.

Bitter truth than anything in the world comes first and foremost is death. I believe that death becomes nearer to everyone in the world than ever in history and people in the last several months could understand better than any other time. Death is everywhere, death is imminent, and death spares none regardless of time and space.

No doubt international philosophy day has its different meaning to everyone this year than to see patience, courage, knowledge, and tolerance. It teaches more and more, and perhaps people are learning to have a new habituated life. Perhaps people have to embrace a new normal life without question. Lastly, this is to remember that Covid-19 comes to us not as a single problem related to medical management but poked to our heart to see their life as a whole.

The writer is a Professor, Dept. of Philosophy, Jagannath University, Dhaka