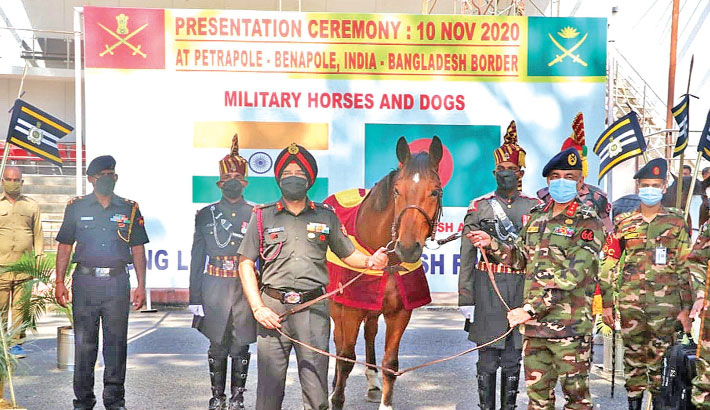 The Indian Army presents a fully trained military horse to the Bangladesh Army at a ceremony at Petrapole-Benapole Integrated Check Post on the India-Bangladesh Border on Tuesday. A total of 20 horses and 10 mine detection dogs were gifted for the Bangladesh Army.

In a move towards further strengthening the ties between the two countries, the Indian Army presented 20 fully trained military horses and 10 mine detection dogs to Bangladesh Army.

“These equines and canines were trained by the Remount and Veterinary Corps of Indian Army,” said the High Commission of India in Dhaka.

The presentation ceremony was held on Tuesday at Petrapole-Benapole Integrated Check Post (ICP) on the India-Bangladesh Border.

An Indian Army delegation led by Major General Narinder Singh Khroud, Chief of Staff of Brahmastra Corps, and a Bangladesh Army delegation led by Major General Mohammad Humayun Kabir, who is commanding the Jashore-based division, were present at the handover ceremony. Brigadier JS Cheema from the Indian High Commission in Dhaka was also present at the event.

“The performance of military dogs in Indian Army has been commendable,” a senior army official said.