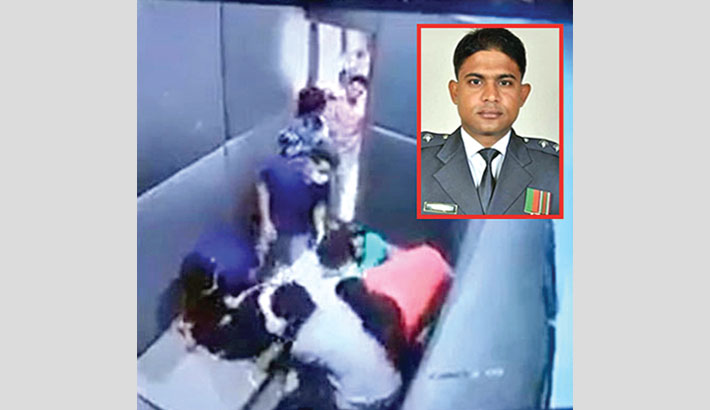 Mind Aid Hospital in the capital was sealed off and 11 of its staff members, including director, were arrested on Tuesday in connection with the death of Senior Assistant Commissioner (Police) Anisul Karim Shipon.

Meanwhile, 10 of the arrestees were placed on seven days’ remand for interrogation about the death.

Deputy Commissioner of Tejgaon Crime Division Harun-Ur-Rashid claimed the death of Anisul Karim was not natural. He has been murdered. “The way the hospital staff members dragged him in the hospital room and pushed him on the floor and beat him, it was murder,” the deputy commissioner said while briefing on the incident.

The staff members involved will be brought under trial, the police officer mentioned.

He further said that the hospital authorities could not show any legal documents and licence.

The hospital was sealed off and its director Niaz Morshed and 10 others were arrested in connection with the death of the police officer, police said.

Anisul Karim, who was posted at Barishal Metropolitan Police’s Traffic Division, was beaten to death allegedly by several staff members of the mental hospital after he went to take treatment there on Monday.

Three to four accused pressed his back by their knees while some tied his hands with a scarf and some hit on his neck and head with their elbows. “For this reason, the Senior AC Anisul Karim died around 12:00pm. It was a murder, but not death due to a disease,” he said.

Ten people already have been arrested in this connection, Harun said.

The police officer said that during primary interrogation, the accused confessed to their involvement in the killing.

A Dhaka court placed them on seven-day police remand after they were produced before it with a plea of 10 days’ remand.

A murder case was filed with Adabar Police Station over the death of Anisul Karim at Mind Aid Hospital in the capital.

Saijuddin Ahmed, father of Anisul Karim, filed the case against 15 named persons, including the 10 arrestees.

Adabar Police Station Officer-in-Charge Kazi Shahiduzzaman said, “We’ve collected the CCTV footage of the hospital. We can see that the hospital employees killed him.”

Anisul Karim has been suffering from mental complications over some family issues, said his brother Rezaul Karim.

Anisul’s family members claimed that the hospital staffers beat him to death.

However, the hospital authorities claimed that they tried to calm down the patient as he was behaving rudely.

In the CCTV footage, it was seen that at around 11:55pm, Anisul Karim was dragged into a room by several staff members. He was thrown to the ground by six employees.

Then, two more employees dressed in blue grabbed his leg. At that time, two employees were hitting him with their elbows on the head.

Arif Mahmud, the manager of the hospital, was standing next to him. Anisul’s hands were tied behind her back with a piece of blue cloth.

When Anisul was turned upside down four minutes later, his body was numb. An employee then splashed water on his face.

Anisul Karim was not moving even then. The staff then cleaned the floor of the room.

Seven minutes later a woman wearing a white apron entered the room. The door of the room was closed in 11 minutes. She pumped his chest in 13 minutes.

Family members said that they took him to the hospital at about 11:35am. Marketing manager Arif Mahmud took him to the first floor in the name of taking him to toilet. At that time, sister of the victim wanted to go with her brother, but Arif and Redwan opposed her and locked collapsible gate.

Arif came to the ground floor at 12:00pm and called his sister to go to the first floor. When she and other members of their family reached there, they found Anisul Karim lying on the floor of a room.

They then rushed him to the National Institute of Cardiovascular Diseases at Shyamoli where its doctors declared him dead. Several colleagues of the senior police officials demanded justice over the death.

The Ain o Salish Kendra (ASK) has expressed concern and demanded investigation into the cause of the death.

Students of Jahangirnagar University formed a human chain on Tuesday, demanding capital punishment for those involved with the incident.

Anisul Karim was buried at Gazipur City Central Graveyard at 9:30am on Tuesday in his hometown after his namaj-e-janaza at Bhawal Rajbari ground.

Anisul Karim, appointed as a police officer in the 31st BCS, was working in Barisal Metropolitan Police recently. Hailing from Kapasia in Gazipur, he is the father of a child.

He was a 33rd batch student of the Department of Biochemistry and Biopsychology of Jahangirnagar University.