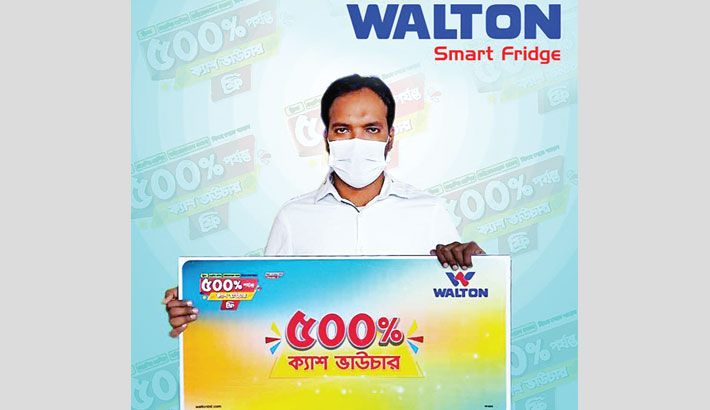 Kazi Inramul Haque, on behalf of his brother Adnan Niaz, who got a cash voucher worth of 500 percent of the value of refrigerator he had purchased, receives a cash voucher at Walton Plaza Goalchamot branch in Faridpur on Thursday.

Adnan Niaz, a businessman in Faridpur, received a cash voucher worth of 500 percent of the price of Walton fridge he had purchased under the local brand’s nationwide ongoing ‘Digital Campaign Season-8,’ commenced across the country with promising a wide range of benefits for customers.

As per the Season-8’s promising benefits, customer will get either cash vouchers up to 500 percent of the value of the purchased product or free appliances such as refrigerator, air conditioner, television etc. upon the purchase of a Walton refrigerator, washing machine or microwave oven from any Walton Plaza or  distributor outlet, said a press release.

Under the benefit, Adnan Niaz, who resides at West Khabaspur of Sadar Upazilla in Faridpur and also has restaurant business, recently purchased a refrigerator of Tk 29,650 at monthly installment basis paying down payment of Tk 10,000 from Walton Plaza Goalchamot branch.

And then, his name, mobile phone number and the model number of the refrigerator were registered. After a while, he received an SMS from Walton with the notification of that he was awarded a cash voucher worth of 500 percent of the value of the refrigerator he had purchased.

On behalf of Walton fridge customer Adnan Niaz, his brother Kazi Inramul Haque formally received the 500 percent worth cash voucher from Zila Parishad Chairman Advocate Shamsul Haque, who was the chief guest at the programme held at Walton Plaza Goalchamot branch on Thursday.

Expressing his reaction on receiving the cash voucher, Adnan Niaz said, ‘Walton is the pride of our country. They focused on giving highest services and benefits for the customers.”

At present, Walton is manufacturing and marketing more than 100 models of fridge, including frost and non-frost refrigerator, freezer and beverage cooler.